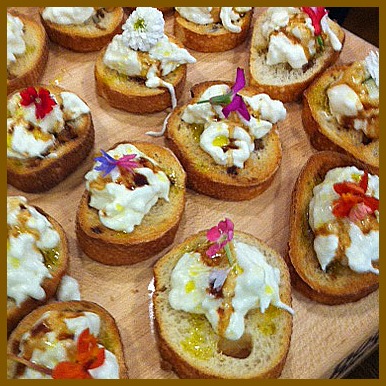 Since 2009, Haven Gastropub has been the anchor of the south Glassell Street spoke of Old Towne Orange’s beloved traffic circle. Now, the Haven Collective, which also owns Taco Asylum in Costa Mesa, is putting down roots a few blocks away on the plaza’s north side. New Provisions Market, a bottle shop and tap room that will also have wine, charcuterie, cheese, and small plates, is opening any day now. (Provisions will be posting the very latest opening info on its Facebook page.) And, in maybe the best O.C. brand-layering yet, Portola Coffee Lab is installing an in-store café, due to open this summer.

I got a peek inside at a media preview this week. As workers filled shelves with bottled craft beers, chef Greg Daniels served bites of items he’ll offer as small plates, including habanero-seasoned deviled eggs with magenta, beet-stained exteriors that seem sure to become a signature—they were scarfed as fast as presented. A few cheeses from the more than 60 the store plans to stock were featured, including Di Stefano burrata (made in Pomona) on a slice of baguette with new-season olive oil, saba (a tangy syrup made from reduced grape must), and edible flowers. OC Baking, not far away also in Orange, is supplying the market’s bread, including loaves for takeaway to accompany cheese and charcuterie.

“This is a real passion project,” Daniels says, looking forward to the preserving he’ll be able to do for the market.  He’s having Weck jars—choice of the hardcore preserver—customized for his own small-batch pickles and relishes, that will be added to the variety of artisanal preserves Provisions is stocking. “Sometimes it might be just twelve jars using something great we find at the farmers market,” he says. “We’ll be able to do that.” Clearly, even chefs are susceptible to the preserving bug. Both Haven Gastropub and Taco Asylum are known for Daniels’ house-made condiments—the addition of Provisions gives his product line plenty of room to expand. I predict we’ll be seeing some interesting things in those Weck jars.