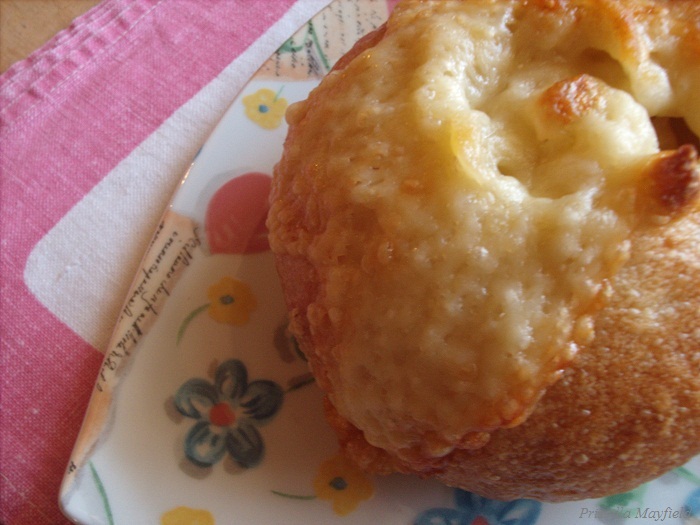 There’s certainly been a lot written about Cream Pan, the Tustin Japanese-French bakery of deservedly great renown. Among young Yelpers especially the mystique of the strawberry croissant holds magical sway. But there is life yet beyond.

This morning, ravenous, I found myself at Cream Pan at a time I rarely do, something in the neighborhood of 10 a.m. I was earlier than 10, actually, but a little later can sometimes work, too. The point is, for any hope of scoring a warm-from-the-oven cheese boule, the perfect breakfast of the Universe, one must hit the sweet spot that occurs somewhere between quarter-till to quarter-after 10… which is not to say sometimes the sweet spot isn’t 9:30 a.m., and sometimes after 10:30—bread is a living thing with its own timetable. And there is a strong element of luck involved.

Cheese boule has been a part of the Cream Pan case array as long as I’ve been going there, seven years or so, and on only a few occasions in all my hundreds of visits have the planets aligned in just this way, allowing for the perfect combination of crusty-chewy bread and not-quite-molten, but still softly plastic, aged Gruyère filling. Today was one of those days! I wonder if I should, like people say, buy a lottery ticket?

Well, the lottery ticket is none too likely, but there are definitely other cheese boules in my future. Occasionally there’ll be one in the case later in the day that somehow missed being sold, but is still worth having—so good even so, and hinting at the even better on a day when you are lucky enough to hit the aforementioned sweet spot.