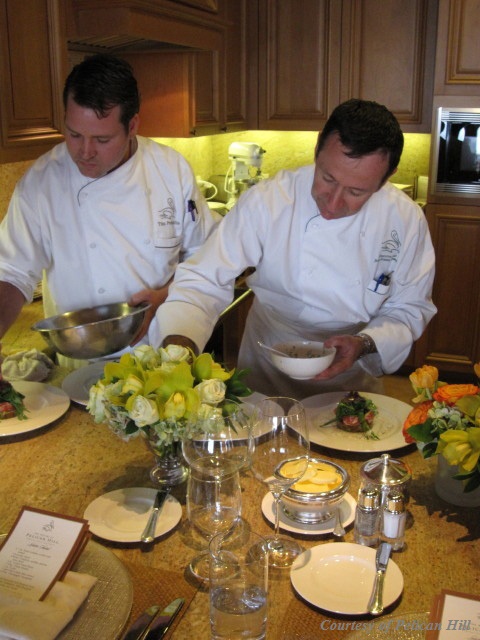 As executive chef of the luxurious Pelican Hill in Newport Coast (just chosen top resort in the nation in Condé Nast Traveler’s 2011 Readers’ Choice Awards), Jean-Pierre Dubray has to think big. He and his team of 78 cooks typically serve about a thousand meals a day between the luxury hotel’s five restaurants, two event spaces, and in-room dining—although an especially busy July this summer saw nearly 50,000.

So why is Dubray standing in the nicely-appointed kitchen of one of the Pelican Hill ocean-view villas, calmly, off-handedly, even, prepping foraged Oregon chanterelles destined for a sauté of Jidori chicken to serve a mere seven people? A Loire Valley native who’s cooked professionally for 25 years in California, Dubray made time in his schedule to teach three small-group Friday cooking classes in Pelican Hill’s Cooking Academy. The first is this week, Nov. 4, featuring a Loire Valley menu. Others are a Rhone/Alps menu Nov. 18, and an Alsatian on Dec. 9. Three other classes will be taught by Luca Cesarini, chef de cuisine of the resort’s Andrea restaurant: Nov. 11, featuring the cuisine of Lombardy; Dec. 2 the Alto Adige; and Dec. 16, a Tuscan menu.

At the cooking academy preview I attended, in addition to the aforementioned sauté, chef Dubray also prepared day-boat scallops on a heavenly sweet-corn purée that relied on the starch in the corn itself to thicken. The things you can learn, sipping prosecco on a barstool within easy range of querying the chef about methods and ingredients. The gently tightened, pure-tasting purée made a perfect pillow for a large seared scallop. (I believed I’ve mentioned corn is in my top 5?) Also on the menu was an heirloom tomato salad with buffalo-milk mozzarella, strewn with crunchy shallots, and dessert, a sautéed peach with made-in-house gelato and lavender meringue garnish.

Many of the vegetables used come from the Irvine Ranch growing grounds of OC Produce, whose high-quality output—much of it organic—is familiar to Orange County farmers-market shoppers. I learned that the chef himself frequents one of my favorite markets, Sundays in Laguna Niguel, for his at-home cooking. (OC Produce can be found there, too.)

Classes are limited to 14, which makes for intimate, easy-going observation of every part of the meal preparation. The $150-per-person cost, in addition to the welcoming prosecco, includes wine chosen for each course, served at the villa’s formally-set table. You can imagine what a festive and romantic holiday outing one of the classes would make, for singles, couples, or groups. The price is comparable to an evening of fine dining—but it’s really more like a fabulous private dinner party by the sea, that happens to come with discreet, designated servers and an executive French chef preparing your meal in real time before your very eyes.