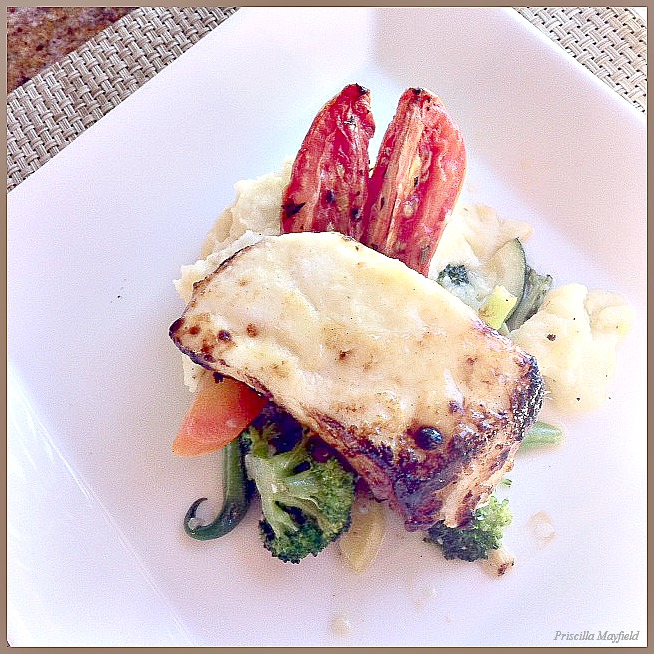 Among the Resort at Pelican Hill’s restaurants, the Coliseum Pool & Grill is the most casual. At a luxury hotel, of course, casual is a relative term. Families gather around tables or in cabanas overlooking the enormous, perfectly round salt water pool, surrounded by palm trees placed so that at any time of the day one casts its tropical shadow across the water. Chef Marc Osier says his goal is for people to want to return again and again, and I dare say he’s been successful. I recently tried a dish from his new fall menu, Chilean sea bass with Meyer lemon and vanilla marinade, accompanied by superb Irvine Ranch-grown vegetables ($26). Roasted in a hot oven, the fish was ethereally tender, without the heavy crust that searing can create. It’s a method I use for wild salmon—I think rich fish especially benefit. The marinade charred slightly, adding a well-developed, roasted flavor.

Chilean sea bass, whose real name is the less-euphonious Patagonian toothfish, can be confusing. Depending on where and how it’s caught, it can be either Best Choice or Avoid on Seafood Watch. The Coliseum Pool & Grill’s is in the former category—Osier is serious about using responsible purveyors. He says, “Our fish is purchased from a local distributor whose fishermen use only sustainable practices. Specifically, those that use lines, not nets, to catch their fish, and harvest fish in the age range from 6 to 9 years, which means they have had the opportunity to reproduce for at least 1 year.”

So, indulge in this Patagonian toothfish dish with confidence. It’s more than one type of good.