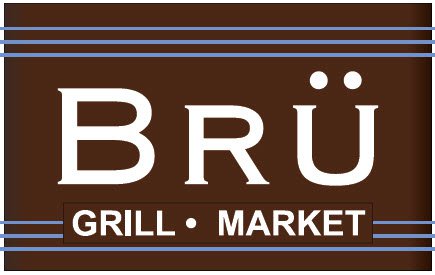 For months now, I’ve been watching an erstwhile, short-lived Carino’s at the very busy corner of El Toro and Rockfield in Lake Forest transforming into… something. Eventually, a sign appeared on the sprawling structure, sporting what I think of as the heavy-metal umlaut: Brü Grill & Market. Owner Matt Plannek, an Irvine resident who, prior to opening Brü, worked in corporate management for restaurant megachains, explains, “It’s just for fun. We have 42 craft beers on tap, and were thinking, brew—Brü. My dad was from Germany, all my brothers speak German—they’d point out using it this way isn’t correct German. My wife says she always sees the u with the two dots as a smiley face. We wanted a place with great food and great service that wasn’t stuffy.”

Open only a few days when I stopped in yesterday, the restaurant was lively, especially having had no promotion to speak of beyond a few updates on its Facebook page. Upon entering, you pass through the market, a large, bright foyer with hundreds of wine bottles, any of which can be bought at retail price and consumed in the restaurant with $10 corkage added. The bar, which offers handmade cocktails made with fresh juices, is equipped with plenty of strategically-sited flat screens, and the airy, high ceilings of both market and bar are punctuated by massive beams.

The open kitchen is kind of glorious, spanning the entire width of the large main space, with embers glowing pleasantly from a wood-burning oven. White-jacketed chef Joseph Gotti supervises all, expediting with a proprietary mien, but not too no-nonsense to refrain from greeting a couple of gawking visitors.

Gotti’s farm-to-table menu reflects the restaurant’s commitment to organic ingredients. The former Patina Group chef makes his own pickles, cures his own olives, stuffs sausage (the “IPA infused” link for the sausage hoagie sandwich—excellent, $12.75), and grinds his own meat. The Brü burger uses ground porterhouse and benefits from both the filet and the rich New York strip. Hand-formed and crumbly, with a fabulous dark exterior char and rare in the middle as ordered, this burger borders on decadent. At $12, it’s also a stone bargain, with aged cheddar, “drunken” caramelized onions, smoked pepper aioli, and fries or salad.

The servers, who wear traditional floor-length waiter’s aprons—all in black—have been imbued with enthusiasm for the menu and mission. The kitchen and bar staffs harvest herbs for food and drink from the newly planted organic garden. Another patio off the bar offers comfy chairs and heaters.

That umlaut has good reason to smile.