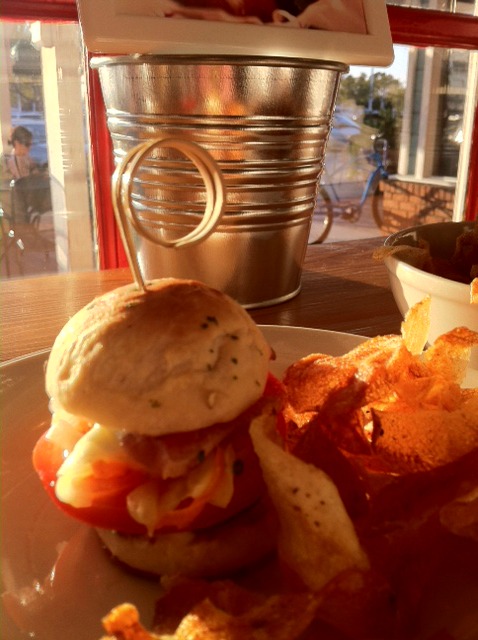 It’s just been a few months, really, but when you’re waiting for something, like the Orange County foodosphere was waiting for SlapFish, time seems to pass at a glacial pace. One of the local truck-to-bricks-and-mortar stories in the Three’s a Trend Truck Stop on my Nibbles & Bits page in the April mag, SlapFish’s delicious seafood, all from sustainable sources, is kind of irreplaceable.

But as of this week, that wait is over:  SlapFish’s doors are open in Huntington Beach—and, co-owners Andrew Gruel and Jethro Naude are already knee-deep in their next restaurant. It’s true! Additional locations were foreshadowed by chef Gruel when I wrote about SlapFish’s growth trajectory in Taste of Orange County back in January. Monday evening at a tasting preview (short story: pretty much everything’s GOOD) Naude told me that SlapFish No. 2 is already in the works, to be installed in the ambitious Anaheim Packing House project from the developer of Costa Mesa’s The Lab and The Camp. With O.C.’s second Umami Burger already announced as a tenant, SlapFish Anaheim should be a perfect fit, and a boon for underserved central O.C.

The Huntington Beach space has a clean, industrial look, white tile and (thankfully) minimal ocean-motif gee-gaws—allowing the few that are there, like an anchor on a chain, to amuse rather than distract. As any SlapFish fan knows, the focus is on the fish: sustainable seafood including the pioneering, deceptively simple Lobsticle that made Orange Coast’s 50 Best Dishes in O.C. issue in December. If I had to bet on a new dish to watch, it’d be the new chowder fries: thick chips drenched in SlapFish’s double-smoked-bacon-enriched New England-style clam chowder. The “Tower of Wasabi Tuna,” a seared-ahi slider on a brioche roll, was also super satisfying—of course, the combination of wasabi with fresh fish is pretty irresistible.

Gruel and Naude project a fall opening for SlapFish Anaheim—not so far away. But this time, the new Huntington Beach location will keep us in sustainable seafood while we wait.