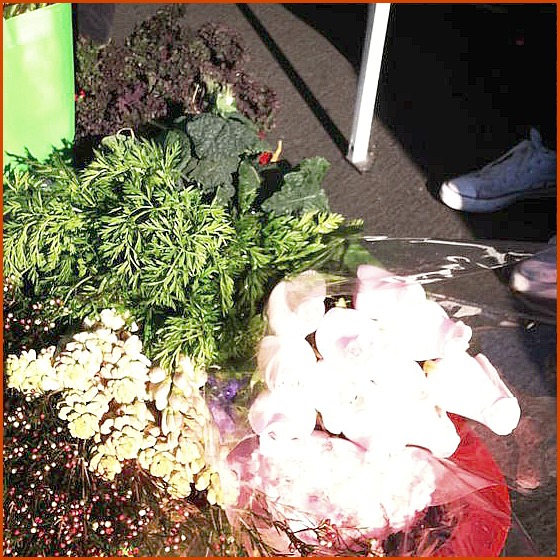 For fans of Britta’s Cafe in Irvine—and they are legion—I’m afraid it’s going to be one of those sudden breakups. The beloved restaurant in Irvine’s University Center for a dozen years (and 14 in Newport Beach before that), will close at the end of this month. “I’m retiring my chef’s coat,” owner Britta Pulliam said today, a little wistfully. “It’s been a great run. The restaurant’s about half-full this evening, and I know every single person’s name. But, it was the right time.”

Pulliam’s been a familiar sight at the Saturday Irvine Farmers Market that’s just a few steps from her restaurant’s door, pulling a little red wagon that gets increasingly filled with fruit, vegetables, and fresh flowers. (In the photo, you can see what she’d found so far when I ran into her at the market in January.) The supplies are mostly for the restaurant, but not entirely—“I cook at home all the time, too,” she says. For the café’s popular farmers market scramble she sautés a variety of vegetables from the market and then scrambles them with egg whites. “Cooking for myself, though,” she says, “I’d do poached eggs, and top the vegetables with salsa and cheese.”

It’s entirely possibly we’ll still see the Corona del Mar resident at the market. “I think there might be a cookbook rattling around in my head,” she says. “And what else? Who knows?”