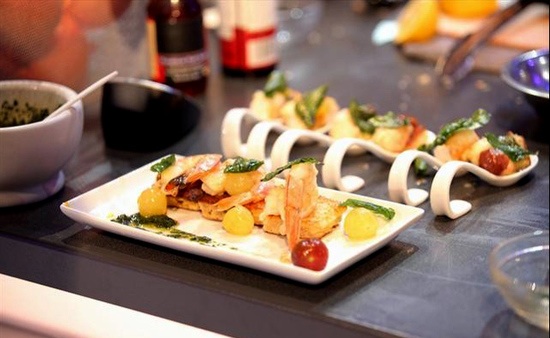 Are you watching The Taste, the new Anthony Bourdain/Nigella Lawson cooking show? Nathaniel Nguyen of Huntington Beach probably is, though I’m sure he’d rather be on screen. The 24-year-old self-taught cook appeared on the first episode of the show, hoping to be one of 16 contestants picked for mentoring by Bourdain, Lawson, chef Ludo Lefebvre, or “Top Chef” alum Brian Malarkey.

While online nattering continues about whether Bourdain has sold out to the very sort of show he’s made a career of mercilessly disparaging, the premise is interesting: The celebrities judge a single dish-in-a-spoon (the “taste” of the title), without finding out who prepared it until they’ve already given thumbs up or down, assembling a team of four from the cooks whose dishes pass muster.

I thought Nguyen’s dish, inspired by classic Cantonese shrimp toast, looked and sounded fab. Maybe a lot to process in a single bite, though: In the hour allotted to cook in studio, he prepared shrimp poached in butter infused with saffron and lemon grass, served over savory, curry-spiced French toast with coconut milk, garnished with Thai basil pistou and citrus-marinated tomato.

Bourdain, Lawson, and Lefebvre commended the ambition of the dish, but sadly, Nguyen wasn’t asked to stay. He points out that while his dish was shown on the first night auditions aired, in real time he was one of the final presenters, when each host was looking for just one additional team member. I imagine by that point they’d been tasting for hours, too. Was the self-described “huge fan of both Anthony and Nigella” intimidated cooking for them? “It was more exciting than intimidating—cooking for anyone is intimidating, as you’re never sure of their response,” Nguyen says. “I was excited for the opportunity to cook for chefs of this caliber—it’s not often I’ll get Nigella Lawson in the United States to try my cooking.”

Formerly chef on the now-defunct Swinging Kitchen food truck, Nguyen is branching out into brunch in Orange County with a new “Morning by Thasos” breakfast menu at Thasos Greek Island Grille near South Coast Plaza, served from 8 a.m. to noon Saturday and Sunday.  It could just be that we haven’t seen the last of that savory French toast and butter-poached shrimp, after all.