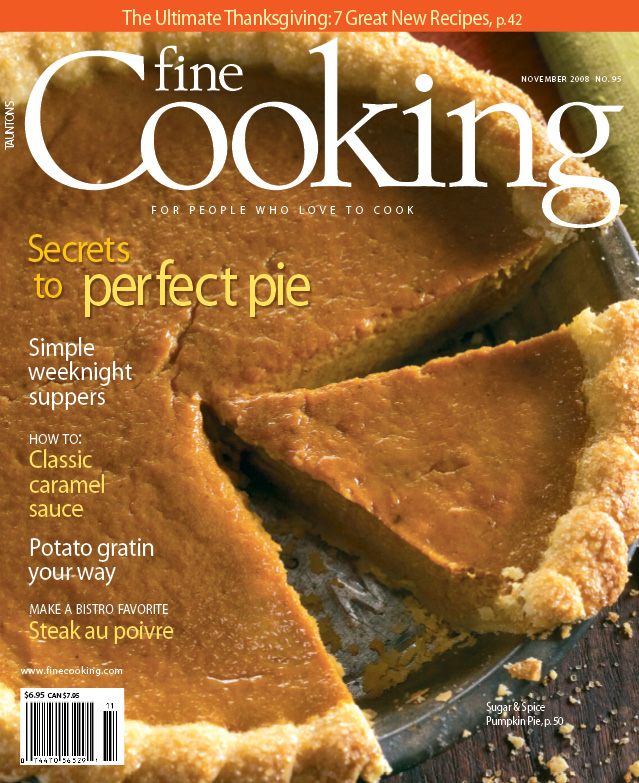 As indicated in yesterday’s ToOC post, there’s some serious dessert-making going on—and not just by the talented restaurant chefs featured in the December “Ultimate Dessert!” issue of Orange Coast. (A digital copy of the December issue is available for purchase.) My first installment of favorite dessert recipes from the mag staff delivers on the implied promise of pumpkin pie—an American classic, but as we know, like other things that fall under that rubric, classic doesn’t necessarily mean good. This sent Senior Editor Chris Christensen on a culinary quest for something better—much better—that didn’t stray too far from the pie’s classic roots.

My Italian mother is a fabulous cook, but when it comes to all-American pumpkin pie, she insists on using Libby’s recipe on the back of the can. Don’t get me wrong, it’s serviceable pie. But even as a young adult, I craved something better and somehow knew it was out there. Thus began a lifelong search for pumpkin in a crust that lives up to its iconic status. Many years, decades of food writing, and dozens of pumpkin pies later, I found it on the cover of my favorite food magazine, Fine Cooking, beside the words: Secrets to Perfect Pie.

The braggadocio is justified. This lovely rendition has a rich, light, silky custard, and a sublime mix of freshly ground spices. Tucked into my favorite all-butter crust, it’s amazingly satisfying. I am fully aware, as with all matters of taste, that my opinion is subjective at best. So here is the recipe, which I’ve adapted slightly to include cookbook author Patricia Wells’ flaky pastry (pâte brisée). Please judge for yourself.—Chris Christensen, Senior Editor

Transfer dough to clean work surface, and with dough scraper, smear it bit by bit across work surface until its smooth and flour and butter are well blended. Form into a flattened round, cover with plastic wrap, and refrigerate for at least 1 hour and up to 24 hours.

On a lightly floured surface, roll out dough into a circle wide enough to overlap a 9-inch ceramic, metal, or glass pie plate, easing dough into bottom and sides and gently pressing into place. Fold overhang under and crimp decoratively. Wrap and refrigerate for at least 30 minutes or up to overnight, or freeze up to 2 weeks.

To blind-bake crust, position rack in center of oven and heat oven to 400 degrees. Line  chilled pie shell with parchment and fill with dried beans or pie weights. Bake until sides have just set and look dry, 15 to 30 minutes. If dough starts to bubble while baking, gently push them down with back of spoon. Cool crust completely on wire rack.

Pour filling into cooled piecrust. Bake until pie is set around the outside but sill slightly wet and jiggly in the center, about 1 hour (check at about 50 minutes). Filling will continue to set as it cools. Cool pie completely on wire rack and refrigerate for at least 2 hours and up to 2 days before serving.

The topping: Whip cream with electric mixer on medium-high speed until it forms very soft peaks, about 2 minutes. Add sugar, ginger, and brandy and continue whipping until it forms medium-firm peaks, about 3 seconds longer. Dollop in center of pie, or dollop on servings.