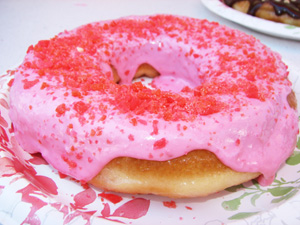 If you plan a visit to the OC Fair this weekend, maybe I’ll see you there. I’m judging two culinary events, one this evening and another tomorrow. At 7 tonight in the OC Promenade it’s this week’s Chef Challenge, with two redoubtable contestants: Mike Doctulero of Scott’s Restaurant in Costa Mesa, and Ben Wallenbeck of Ways & Means in Orange. The theme: Water.

Challenges this year reflect the Elements; last week’s Earth was won by Danny Godinez, chef-owner of the two Anepalco’s in Orange and soon-to-open El Mercado Modern in downtown Santa Ana. The next two Fridays will be Air and Fire. Since both both Doctulero and Wallenbeck are known to be seafood chefs, I expect tonight’s contest to be about seafood, and not the liquid itself.

Tomorrow will be a hot one, both weather and menu-wise: The Chili, Wings, & Salsa contest, with entries from the public in any or all of those categories, takes place in the OC Promenade at 1 p.m. I love chile heat—this weather, not so much.

While in the Promenade, take a look at the culinary arts winners, including Orange Coast’s design director, Mindy Benham, whose corn cookies won a blue ribbon.

Fair fried food note: Are Pop Rocks back? Did they ever leave? If you intend to indulge in a little fried something from one of the food concessionaires, consider the new-this-year Pop Rocks-topped treat from the aptly-named Texas Doughnuts ($8.75). Word’s out you have to eat it fast to get the full Pop Rocks experience.