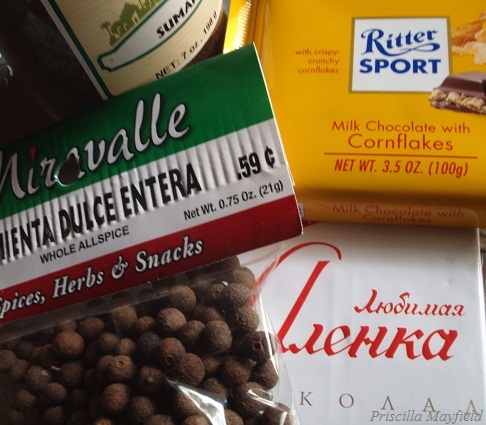 A quick stop in my beloved Persian-plus Mission Ranch Market in Mission Viejo the day before yesterday for a packet of whole allspice and a few Ritter Sport that needed restocking—it’s got the best selection of the German chocolate, and a full range of spices from the Middle Eastern brands Golchin and Sadaf, as one might expect. However my allspice on that day was from a Mexican spice company, Miravalle, whose package was smaller, with a correspondingly lower, if not vanishingly small, price—59 cents. Not that the 99-centers from Golchin or Sadaf would have broken the bank, but I just didn’t need quite that much whole allspice, thankyouverymuch.

Our progress down the tea aisle was impeded temporarily by the cart of a cheerfully oblivious young mother chatting on her cell phone in Russian. MRM is the most Russian store in Orange County, besides being Persian and Indian and Israeli and Asian. And everything else.

Wandering over to the restaurant counter, I asked the nice man in the white lab coat who’s almost always there about an intriguing football-shaped pastry new to the steam table. I wondered if it was a Persian dish—not such an odd question; one ought not just assume things about such an ecumenical menu. “Persian, yes,” he said. Called? (Its sign was in Arabic, and I wanted to be able to ask for it.) “Proshky,” he said. “Proshky,” I repeated.

“Proshky.” Proshky. Proshky? Maybe pi-roshky? A light dawned. We were talking about piroshki, the Russian savory pies, of which this was a Persian expression. Classic Perussian, as my husband the half-a-Russian says about MRM.