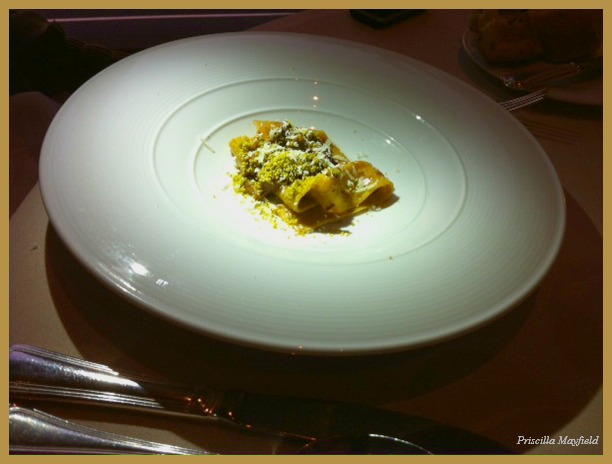 Fineo wouldn’t be the first chef to hone his attention to detail under the notoriously exacting Keller—but talking with him, you quickly get the feeling that under that affable exterior he’s plenty persnickety on his own; driving to the supplier in downtown Los Angeles to select his own white Piemontese truffles, picking through fresh Oregon porcini for only the choicest specimens, using Pennsylvania lamb because, well, it’s the best.

At a recent tasting of Andrea’s autumn menu, that lamb appeared in Sicilian Pistachio Pappardelle with Braised Lamb Ragù ($23), a dish Fineo developed after becoming intrigued by a lamb-pistachio dish he read about in an old cookbook. A whole, bone-in shoulder is braised overnight with aromatics and reduced red wine, which produces a dark, clear, intensely flavored stock and falling-apart lamb. The dough for the wide noodles includes ground pistachio, and a shower of the pale-green powder garnishes the finished dish, the toasted-nut richness combining with the lamb in an unexpectedly harmonious way. Servers offer fresh Parmigiano, and a little—only a little— is a nice touch.

The pistachio pappardelle, like all the pastas at Andrea, is made in-house. I was thrilled to get a peek into the famed temperature-controlled pasta room with its own filtered-water system. Fresh pasta is made there every day of the week, from extruded cut shapes like rigatoni and fusilli, to noodles of various widths, to filled pastas. An unusual and fantastically chewy cavatelli with ricotta in the dough, each dumpling-like shape pinched by hand, was served with a sauce of langoustine, chanterelles, and brown butter ($25), but I can imagine it with any number of simpatico sauces. Fineo’s repertoire even includes a gluten-free pasta, but more about that at a later date.