Home Uncategorized Locavores, the OC Fair Has You Covered 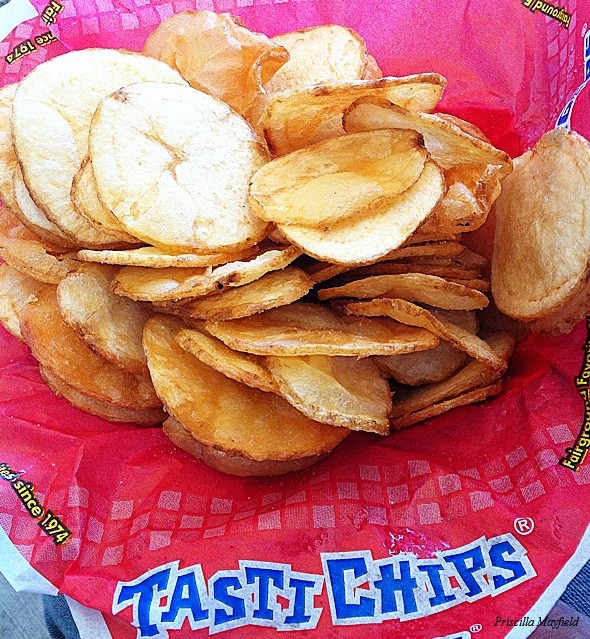 I’m only slightly joking when I say Tasti Chips, the fresh-fried potato chips available at the OC Fair, are the health food option among deep-fried cookie dough and foot-long corn dogs. They’re kind of otherworldly delicious, too. I like ‘em with an extra shake of salt and a generous spritz of the malt vinegar thoughtfully provided, but available toppings include Parmesan-garlic, and nacho cheese sauce. A super-generous, suitable-for-sharing serving is $7.50—the $10.50 size surely would feed an entourage.

The tastes-good aspect is obvious. But who would have guessed they’re locavore-friendly, too. Not only is the 40-year-old family-owned company headquartered in the north San Diego County city of Vista, but director of operations Steve Vartanian says the white potatoes used for the chips are grown on a San Jacinto Valley family farm that’s been in business 70 years.

So far, Tasti Chips is solely a Southern California treat. Other than Orange County, fairs where they’re sold include Antelope Valley, San Diego, and Los Angeles—the latter coming up in September. Steve’s wife Julie told me she remembers going to the Tasti Chips booth at San Diego’s Del Mar fairgrounds as a child. And now here she is, part of the dynasty.

But there’s more than potato chips in the organization, though. Next-door Grantburgers is part of the business too, and where you can find the chile relleno pretzel burger ($15.95) that took this year’s Concessionaires Cup, the competition among all the fair food sellers. After tasting it, I would not be at all surprised to see the concept start appearing on gourmet burgers in brick-and-mortar restaurants. You have time yet to try it yourself, with a side of Tasti Chips—the OC Fair runs through Sunday, Aug. 10.