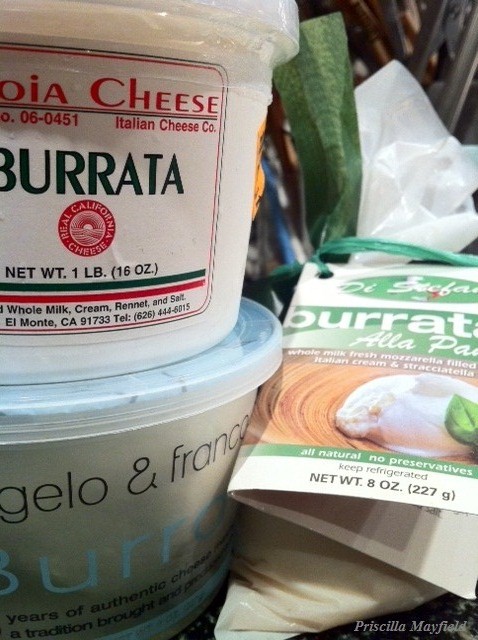 Burrata, the fresh mozzarella with the creamy middle, has quietly but quickly made its way into caprese salads and onto pizzas in Italian restaurants across the land. And what’s not to like? The amorphous spheres have a most appealing way of oozing their soft insides over whatever they’re perched upon, spreading a soft, milky tang over all.

In summer, burrata is my go-to cheese for caprese salads. But it’s just as fantastic on warm or wintry things, from a rustic, garlic-rubbed bruschetta, needing only generous crunchy salt, cracked pepper, and fine olive oil, to something more elaborate (but still easy) like chef Suzanne Goin’s broccoli with warm anchovy vinaigrette, from the book documenting her influential L.A. restaurant’s ”Sunday Suppers at Lucques” (Knopf, 2005).

The increased profile of this fresh cheese is largely thanks to Nancy Silverton’s seminal Pizzeria Mozza, of which we now have our own storefront in Newport Beach. In “The Mozza Cookbook” (Knopf, 2011), Silverton writes in detail about the cheeses she uses, including burrata. (You can read my Taste of Orange County post about the book here.) Not a cheese with a long history, burrata dates only from the 1930s in the Italian region of Puglia, and didn’t explode in the U.S. until the late 1990s. Happily, I think we can assume it’s here for the long haul.

I’ve tried all three of the southern California burratas. Whole Foods carries two of them, Angelo & Franco ($5.99 for a one-pound container), made in Hawthorne, and Di Stefano ($7.99 a four-ounce ball), from Baldwin Park. Silverton says the latter is her favorite, though she also specifies South El Monte-made Gioia ($10.99 a pound), the third brand of the triumvirate, for some dishes. Gioia is available in O.C. at Bristol Farms. (If there are other SoCal burratas out there, I’d appreciate a heads-up!)

On a recent weekend, my son was in Hawthorne and at my request stopped for some fresh-from-the-factory Angelo & Franco. It seemed like a good time to finally dispense with an idea I’d been kicking around: a burrata-off. I collected Gioia and Di Stefano, and one of Le Pain Quotidien’s immense, rustic, part-whole wheat sourdough boules. We’d try each burrata on the level playing field of a toasted slice rubbed with garlic, seasoned with salt, pepper, and olive oil.

Verdict: All were edible, but two were worth the not-inconsiderable cost. Angelo & Franco, already my fave before the burrata-off, won it for me in a walkaway. Gioia was an infinitesimally close second. Both had everything you want in a burrata—tender creaminess with a definite cheese tang. (At Gioia’s factory and online, you can get individual, four-ounce orbs, which would definitely be my overall pick if available regular retail in O.C.) The big surprise was none of us preferred the too-rich Di Stefano. Of course, factory-to-store handling is critical, but the sell-by dates were good, and I don’t think the mouth-coating unctuousness was a product of age or mishandling, but a style. In general, this is not a criticism you’ll hear from me often—rich upon rich is one of my favorite flavor profiles.

However, I can totally imagine Di Stefano could be the big winner in someone else’s burrata-off. Maybe yours! If you decide to accept this mission, I’d be very interested in your results.