Home Uncategorized If cabbage could talk… 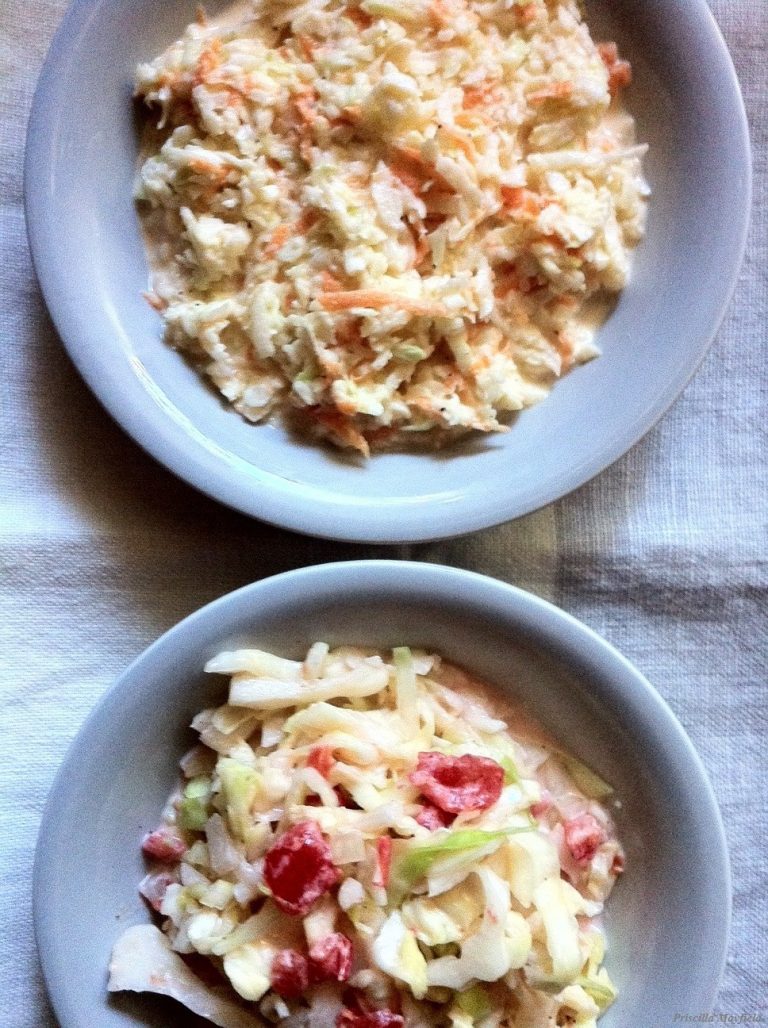 Call it a Tale of Two Coleslaws. One is adamantly hand-hewn—artisanal, even—with a righteous Southern provenance. The second’s only legacy is a fast-food fantasy from a far-distant childhood almost certainly idealized in hindsight.

The first, with the great, ur-slaw name Ma ‘Slaw, is the recipe of Orange Coast Editor-in-Chief Martin J. Smith’s grandmother. You’ll remember his mother’s Pecan Pralines from Taste of Orange County’s staff dessert roundup last December; both recipes are gathered in a self-published family cookbook, “Oleo, Velveeta & Mango Salsa: A Cookbook of the Old South, the New West, and Everywhere Else We’ve Scattered.” Along with many other Southern Californians (people still read newspapers then), I was introduced to Ma ‘Slaw in Smith’s 2002 “The Secret of ‘Slaw,” in the Sunday Los Angeles Times Magazine. What kind of serendipitous relevance was this—coleslaw, one of my favorite things, in the Sunday paper mag?

But when I got to the following, I blanched: “The only way to really screw up coleslaw—besides adding hair from a Boston terrier—is to dump everything into a food processor and hit the start button.” (To understand how canine fur, among other things, might fit into the scenario, I recommend clicking here to read the original—highly rewarding.) It wasn’t the dog hair that brought me up short—probably that went right by, at least at first. It was that other part. Because, yes, one of the hallmarks of my coleslaw is that it’s all food processor, all the time.

Of my finely shredded, indeed, one-step-from-total-annihilation texture, Smith allowed, “It might taste OK, but coleslaw shouldn’t go down like grits. It should crunch. You should have to fork it into your mouth like hay.” And yes, Ma ‘Slaw is a coleslaw crunchfest, with an unshy amount of chopped onion plus the surprising inclusion of juicy tomato. The only other slaw I’ve ever run across that adds tomato to the cabbage was Jeremiah Tower’s aristocratic aunt’s recipe in his “New American Classics” (Harper & Row, 1986). Tower was a founding chef of Berkeley’s Chez Panisse; Ma ‘Slaw shares this idiosyncrasy with pretty haute company.

My coleslaw (no tomatoes) has cabbage and a little carrot, a sweet mayonnaise-and-buttermilk dressing with an essential cider-vinegar punch, and plenty of freshly-ground black pepper. It’s a confetti-like affair that has always embodied the pursuit of a single goal: Emulate as closely as possible the coleslaw from the early-1970s Kentucky Fried Chicken on Harbor Boulevard in La Habra. By now, my homage has been a part of my life decades longer than its avatar was, which is kind of weird but there you have it.

So, two slaws, each with a story to tell. Maybe you already have an inkling which you’ll prefer, but do try the two of them. You just might be surprised—and I would not be surprised to hear you liked them both.

Publication of the Ma ’Slaw recipe went viral when it came out in 2002, at least among my cousins. It turned out they all shared precisely the same memories of our beloved grandmother, including the one about hard candies covered in Boston terrier hair. No one had ever dared speak them out loud, and the recipe piece became sort of therapeutic that way. The healing has begun. That said, to a cousin, all of them still make the slaw exactly as Ma did, because it’s simply the best there is.—Martin J. Smith

Cut cabbage in half, remove core, and chop coarsely with a knife. Chop onion very fine. Chop tomatoes. Mix three main ingredients together in a large bowl with mayonnaise, then season with salt and pepper. Serve chilled.

To the Cuisinart! Or the box grater, if you must.

Juice of half a lemon