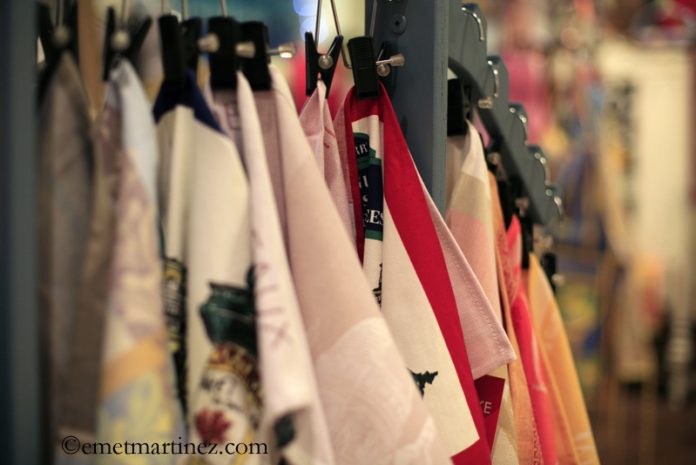 Tustin already has a lot of good things going on—a Wednesday farmers market on a designated gravel-lined site with its own permanent sign, the ineffably great Cream Pan, which for all this ineffability has certainly had many thousands of words written about it, a friendly and good sushi bar with a roll named for former resident Chuck Norris. (Two words in re the Chuck Norris Roll @ Tommy’s: No rice.)

As it turns out Tustin also has I Dream of France, a charming little store in old town owned by husband and wife Jean-Michel and Brett Carlouet selling French and French-designed goods. I first encountered this evocative and mysterious name on a magnetic sign affixed to the door of a fabulous fully-restored 1970 Chevrolet pickup truck, painted in the original metallic gold (I now know). I also now know it has rally wheels that would have been found on a Corvette of the same year. And I ALREADY thought it was cool!

The truck was parked in the farmers market lot on a non-market day. WHAT is that all about, I Dream of France? And what’s with the classic pickup? Not to mention, who doesn’t?

So, now I know. First opened online, the store has been in its Main Street location since October. Brett Carlouet grew up in North Tustin, and Jean-Michel, a former airline pilot from Poitiers, joined her. They live in the North Tustin/East Orange area with their two young children.

IDoF has table and kitchen linens in typically striking Provençal patterns, some of them modern variations. I think traditional Provençal textiles already have a strongly modernistic air despite their ancient origins—a built-in classical agelessness. If you, like me, find our Orange County climate quite Provençal enough for lots of outdoor cooking and eating, perhaps also like me you see an outdoor table covered with one of these instantly recognizable cloths is almost always just exactly right.

An invisible modern convenience helps a well-dressed outdoor table easier to make a reality: Some of the traditional textiles are coated with a UV-protective and stain-shedding Teflon acrylic. At IDoF’s former location across the street such a tablecloth was displayed outdoors in the sun every day for an entire year, and shows not a whit of fading.

IDoF also has a beautiful selection of French kitchen towels, which, even as beautiful as they are, are made for actual work—I think we mostly all have a stack of reusable kitchen towels, don’t we, rather than a reliance on disposable paper? Yes, but only a few of mine are French Jacquard. I can tell you they last a long, long time—I’m glad to know a place I can replenish my stock. Some unusual, amusing terrycloth kitchen towels with French food designs I would easily have had one each of if I hadn’t kept my credit card safely zipped away. Why shouldn’t washable, workhorse kitchen linens be beautiful, as well as from France, anyways?

A little dishware, Provençal pottery in soft ochres and greens, and colorful Quimper ware from Brittany, similar to what sometimes appears in big chain kitchen ware stores but here in an edited, personal, boutique collection. Can’t you see it landed on those tablecloths? All that’s needed is a glass of rosé.

(This afternoon and evening, February 10, from 4 to 7 p.m., I Dream of France and other nearby Old Town Tustin merchants are having a Valentine’s Shopping Party, with wine, snacks, and a raffle for pre-Valentine’s Day shoppers. Participating are Buttermilk Sky, Whimzy (both in Jamestown Village on El Camino Real), and The Wedding Pantry, which like I Dream of France is on Main Street. )