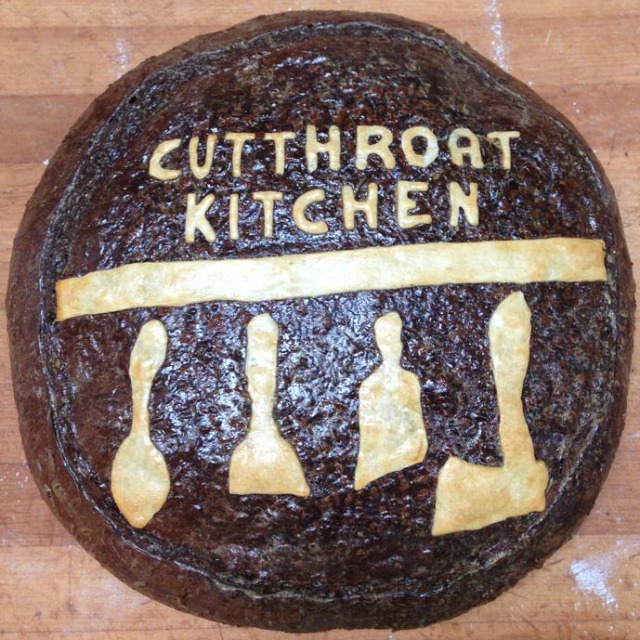 By now everybody knows chef Jamie Gwen won Sunday’s “Cutthroat Kitchen.” (Read Gwen’s and judge Simon Majumdar’s pre-broadcast impressions in my previous Taste of Orange County post here.) Dean Kim, bread baker to the O.C. restaurant stars, took to his OC Baking ovens to create a gorgeous commemorative boule as she competed, as a good-luck talisman—that’s it in the photo. Gwen’s “put my head down and cook” strategy totally worked—though I also appreciate how she primed the pump when monkey wrenches were auctioned, quickly bidding high and then stepping back to allow auction psychology do its work. Her competitors fell all over themselves rushing to outbid each other.

Through first-round sabotage, Gwen was forced to cook using only aluminum foil—no other cookware or implements. “I really had to channel my inner MacGyver,” she says. She deep-fried wontons with only a crimped length of foil to poke gingerly into the bubbling oil. When access to cooking tools was returned in the second round, the camera caught Gwen exultantly picking up a long wooden spoon and exclaiming, “Utensils! It’s heaven!”

A whole bunch of sexist trash-talking from the two male cheftestants and one other female—all of whom, remember, were big losers—wasn’t exactly surprising, but Gwen used her better-to-be-underestimated-by-your-enemies position to advantage. Of course, it helps that she has the cooking chops needed to impress even a hard-nosed, worldly judge like Majumdar. One cocky young chef had his beloved truffle oil called out in no uncertain terms—after ascertaining its presence in the dish, Majumdar brought the self-congratulatory chef up short by calling it one of the most vile ingredients on God’s green earth. Maybe this especially resonated with me because it affirms a belief I share—but it was great TV. (Watch host Alton Brown bringing Majumdar up to speed on the sabotage in the after-show debriefing here.)

“I went there to win,” Gwens says, but had two goals in mind on the way. “One was, not to go home first. The second was, get everything on the plate.” Done and done. Moreover, “I’m ready,” Gwen says. “I’d do it all over again in a heartbeat.”

No word yet on whether there’s going to be a final showdown, though all the individual winners the Food Network will have assembled after 13 episodes have aired makes it seem like a good bet. As does betting on chef Jamie Gwen for the big win.