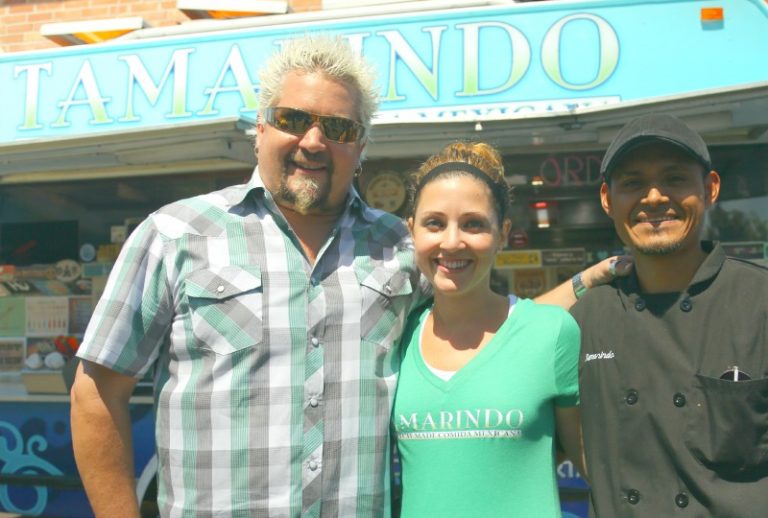 Orange County’s gourmet food truck fleet has seen some inevitable shakeout. Some players, like vegan superstar Seabirds, have gone brick and mortar, others just quietly fade away. But Pedro and Sarah Resendiz’ alta-Mex Tamarindo Truck shows no sign of slowing down. When I wrote about the truck last year, it was solidly booked, between private parties, brewery stints, and food-truck roundups—and this is still the case.

What of the irrepressible Fieri? “Guy was extremely professional, knowledgeable, and humble,” Sarah says. “He treated the shoot and our food with a ton of respect. I always wondered if his reaction to the food was genuine or if it was staged/scripted, and it is 100 percent genuine. He did not taste ONE THING on our truck until the cameras were rolling and he took a bite of the completed dishes. There is no script or direction from the crew—he came out, shook our hand and said let’s do this!”

Dana Point’s Lantern Bay Park is the episode’s ocean-view setting, and Pedro made his Drunken Torta and green chilaquiles for Fieri. “Even after the cameras stopped rolling, between takes Guy would go on and on about how Pedro had ‘the golden touch’ and how the food was amazing,” Sarah says. Fieri encouraged them to open their own brick-and-mortar restaurant, and even asked them to cater his birthday party.

Hope this happens! In the meantime, both the torta and chilaquiles are available on the truck, which has a nice every-other-Saturday gig this summer at the Old Towne Orange Farmers & Artisans Market. Tamarindo will also be at all the Dana Point Concerts in the Park, the Doheny Surf Fest on June 28 and 29, and will defend its first-place title in the salsa challenge at the San Clemente Fiesta Street Festival on Aug. 10. So, lots of opportunities to try the soon-to-be-famous Drunken Torta or anything else on Tamarindo’s fresh, Cal-Mex menu. (Keep up with the very latest Tamarindo Truck schedule info on their Twitter account.)