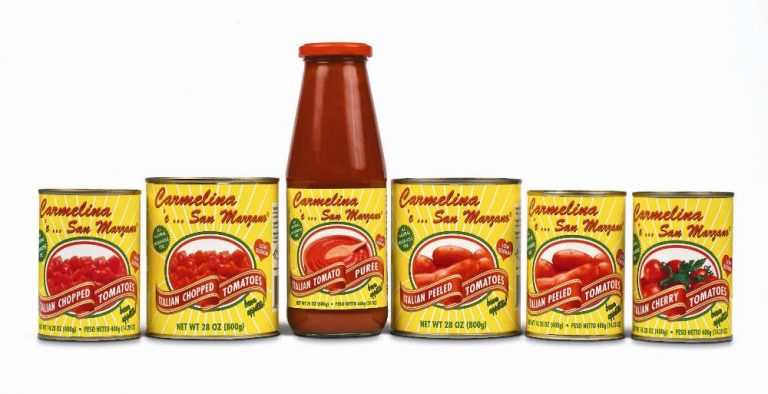 As previously mentioned in ToOC, my long search for great tomatoes with NO JUNK came to an abrupt, blessed end when I read the label on a can of Carmelina Brands. And then much more recently, I got a whiff of worlds colliding when discerning, not to say hard-nosed, mobile Neapolitan pizza maker TJ’s Woodfire Pizza switched to Carmelina—exactly the sort of local-brand layering I can totally get behind. (You can read my February ToOC post about TJ’s Woodfire here.)

I’m almost certain my own moment of deliverance came during a visit to Claro’s Market in Tustin, where a changing variety of tomato products and brands kept me busy scouring labels for literal years (in addition to every other tomato label I came across, anywhere). I believe I’ve tried all the Carmelina varieties by now—chopped, whole, organic and conventional (they pack both)—and they have been unfailingly sweet, rich, super tomatoey. They really perform, cooking-wise. So, I found my tomatoes. It’s just pure gravy that the company is local, headquartered in Mission Viejo.

President and C.E.O. Matt Maslowski (like his company, a Mission Viejo resident), having sold his second successful enterprise and anticipating early retirement, instead found himself in 1996 back to work building a third, which developed into Carmelina Brands. The company is named for Maslowski’s aunt Carmela—“a strong influence in my life and one of the best cookers of Italian food ever. It’s our way of honoring her legacy,” he says. Maslowski, who cooks a bit himself, travels to Italy five or six times a year—one trip is for “tomato forecasting,” for instance—supervising growing, packing, and shipping of product. He’s serious about his company’s no-additive ethic.

It is surprising—and dispiriting—how many tomato canners add calcium chloride, a firming agent, and citric acid, a preservative. Both of these chemicals shelter under the “natural” umbrella, but I avoid them because 1. I don’t like the weird, plasticky texture of calcium-chloride-treated tomatoes, and, 2. I really don’t like citric acid’s unmistakable, dominating, acrid flavor. I would also prefer to avoid (though it’s not a deal-breaker) the sad, stewed excuse for a basil sprig that some include. Even more surprising than the sheer ubiquity of added chemicals is a lack of correlation between price and purity. Domestic as well as imported tomatoes positioned firmly in the Fancy realm, even those imports with the coveted—and legally regulated—San Marzano D.O.P. are fully as likely as bottom-shelf supermarket staples to be dosed. Organic brands, too, often have one or the other or both.

D.O.P indicates a European Union “Protected Geographic Status” designation, in this case for tomatoes of certain varieties grown in a certain part of Campania, the Italian region whose capital is Naples. As my tomato travails wore on, the San Marzano stamp on a can assumed a nefarious air for me, because the name is bandied about quite a bit as a sort of shorthand for best. Carmelina tomatoes are grown in Campania, in the same area as those bearing D.O.P. designation, however the company opts out of paid membership in the consortium that permits use of the legal term on product labels. And, I must say, by the time I happened across their tomatoes, I was intrigued to note the absence of that D.O.P on the label, since I’d already concluded that evidence of this particular legal status was not by itself an indicator of quality.

“We’ve chosen to market without the D.O.P or Consorzio San Marzano stamp because we know the quality of our brand can compete with any D.O.P. product,” says Maslowski. If Carmelina doesn’t use additives and ends up with a superior product, why do so many others? Maslowski said citric acid can correct pH levels that control mold growth as food is processed, or, waiting to be processed. He doesn’t need it for his products, because the fruit is canned within four hours of harvest. As for calcium chloride conferring its unpleasant, unnatural texture, Maslowski says, “It keeps the tomato from cooking down into sauce.” And why in the world would anyone want that?

Besides Claro’s (with O.C. stores in La Habra and the aforementioned Tustin), Carmelina products are sold at Bristol Farms in Newport Beach, Gelson’s in Irvine and Newport Beach, and Whole Foods Tustin and Huntington Beach, as well as Amazon.com.

More deep canned-tomato culture coming up right quick in ToOC, including (but not limited to!) a quick, delicious, non-tomato starter, the only-slightly-hyperbolically-titled One True Way to marinara, a recipe from Carmelina chef Giacomo Pagano, and quite possibly one from company president Maslowski.