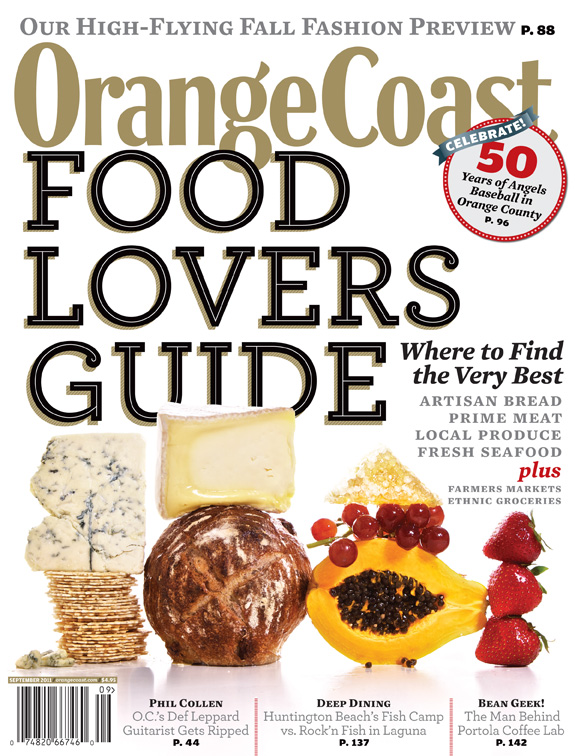 Over on the print side of the world, the September issue of Orange Coast has a cover story relevant to our interests—it’s the Food Lovers Guide. Packed chockablock with great, useful info, this is definitely another keeper, like February’s pizza guide. (A digital copy is easy to order by clicking here.)

The very juicy Meat section spotlights Fullerton’s Gem Meats, including an interesting Q&A with owner Brad Wick. It’s good to know this North County institution remains relevant. When I lived up that way it was well known that Gem was where all the best people got their everyday and special-occasion meat, and I am glad to know this is still so.

The Food Lovers Guide Meat section also highlights a newer kid on the block, the Meat House, a franchised brand headquartered in New Hampshire with three O.C. locations. I visited the Mission Viejo store (others are in Brea and Costa Mesa) the other Sunday and found high-quality Parma prosciutto ($17.99 a pound), that the counter guy sliced quite nicely—something of a grail for me, both the finding and the slicing. I appreciate the intent of airtight Cryovac for the sliced meat, a great idea that I’d like to see more at deli and service meat counters, but several slices of precious prosciutto were goners when I opened the package at home, having been too close to the sealed, laminated edge of the heavy plastic sheeting. Nothing wrong with the product, however—it was just right with dead-ripe cantaloupe.

Moving up the luxury-ham ladder, the Meat House also carries the Spanish cured ham called pata negra for $85 a pound, and the taste I had that day was very good. The per-pound figure may seem astronomic, but an order of thin appetizer slices amounts to only several dollars. Recently I bought pata negra at Bristol Farms in Newport Beach at something like $124 a pound, an eye-popping amount to be sure, but what I needed cost a mere $6.

Cheese was what I’d stopped into the Meat House for in the first place, actually—although as it turned out there was no ricotta salata in the otherwise well-stocked case. Instead I got classic California Vella dry Jack, which stood in admirably in my chopped salad that evening. A cut of nicely ripe Tallegio, not often seen in such good condition, was a bonus, impulse-buy treat. Breads from OC Baking Company, including owner Dean Kim’s very good baguette, were another welcome sight.