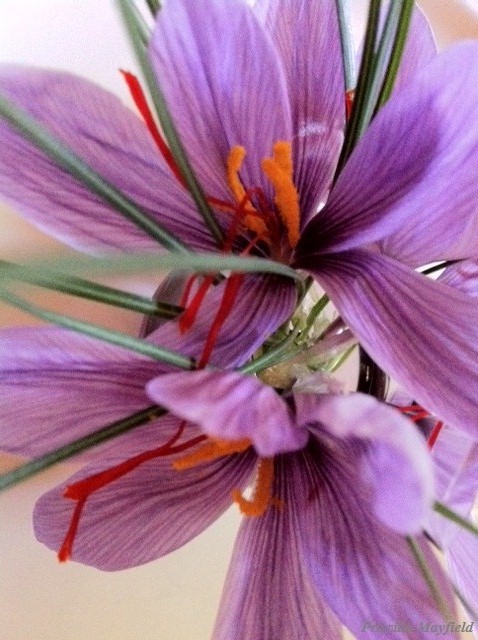 Some years ago, with the optimism inherent in the act, I planted a bunch of saffron crocus bulbs. Understatement: They did not run riot in the garden. Some years there was no evidence of their existence at all—others, a few of the small, ombre-purple, crepe-papery blooms showed, each with the three velvety red stigmas that were the whole point of the exercise in the FIRST place.

I recall one year gleaning just enough to color and flavor clear fish stock for a little moat around a square of sautéed halibut—a course in our Christmas eve dinner. Another harvest, such as it was, the pinch went into rice, the small amount making the world’s most subtle saffron rice. Subtle, maybe, but there.

But many years, no blooms at all, just lots of the spiky greenery that appears after the flowers die back—which, as we have seen, can also occur without benefit of flowers. Then, this weekend, all of a sudden, FIVE! Fifteen threads! I chalk it up to the extra rainfall we’ve had—though regularly drip-irrigated, there’s nothing like actual rain to encourage plants to, you know, grow.

Now, where to spend this homegrown treasure. We shall see.