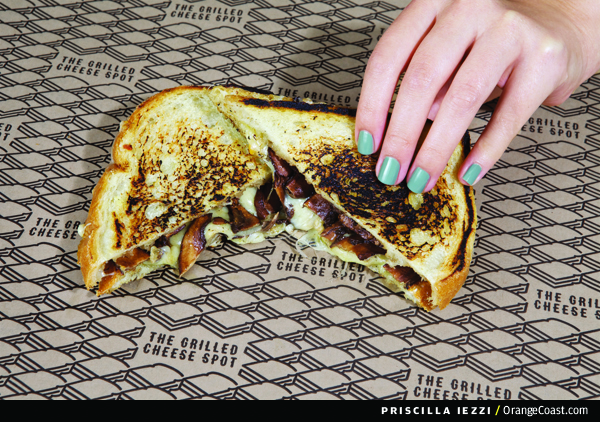 Culled from our print pages, all the food news from the April 2013 magazine!

Just about any food can be smoked, either by infusion or using plain ol’ wood chips and fire. Whatever the process, O.C. chefs and foodies can’t get enough of this distinctive flavor—even in sophisticated cocktails.

Broadway by Amar Santana
The mixologists in this bustling, sophisticated space are among O.C.’s best. And one of their most creative sips is the off-list Sergio Leone No. 2: Bulleit rye whiskey, Luxardo Morlacco Cherry Liqueur, and Averna Amaro digestif, infused with mesquite smoke and garnished with a sage leaf. 328 Glenneyre St., Laguna Beach, 949-715-8234, broadwaybyamarsantana.com

Fans of the Crosby in downtown Santa Ana will appreciate this team’s new canteen around the corner called The Grilled Cheese Spot. You’ll find the same hip ambience, only it’s tiny and tableless—an indoor stand, literally. You order—cash only (there’s an ATM onsite)—then stand at the metal counter to eat. The menu is enticing, with sides that include tomato soup ($3). Now, about those cheesy stacks: Build your own ($7), choosing from among seven bread options, and one or two kinds each of 15 cheeses and nine vegetables, with optional add-ons ($1.50 each) such as a fried egg, braised short ribs, and roast turkey. Or order one of chef Aron Habiger’s six rotating house sandwiches ($5 to $11), among them the deliciously humble Starving Artist of white bread, Gruyere cheese, and balsamic mushrooms ($5). 318 W. Fifth St., 714-542-2235, thegrilledcheesespot.com

George Katakalidis has moved on from the Daphne’s Greek Cafe chain he founded in 1991, having sold it after two decades to open the new casual Greek/Mediterranean concept Tavérna Blu at Irvine Spectrum Center. On the cafe’s website, Katakalidis notes the cuisine of Greece “is as varied as its original city-states,” noting the north has four seasons, the south has two, and the islands “are forever sunny and Blu.” His similarly varied menu includes toasted beets with spicy feta and quinoa ($5); beef-lamb or spicy-chicken pita or wrap sandwiches ($9); Greek-inflected salads ($9) and Mediterranean pastas ($10); house specials such as crispy-skin chicken ($16) and slow-braised lamb shank ($20); sampler platters ($22); and desserts, including Heaven ($6), with mascarpone, chocolate mousse, espresso, and Amaretto. 81 Fortune Drive, 949-450-1100, tavernablu.com

Food truck darling Taco Maria digs in at a perma-site in The OC Mix, a frequent Costa Mesa stop on owner Carlos Salgado’s truck circuit. We can’t wait to nosh on his enlightened Chicano cuisine—refined chicken-thigh mole with smoked dates by way of taco or burrito. Star anise, cinnamon, and a dab of fig jam turn his rice pudding into a dream. Look for it next to the Cheese Shop this spring. 3313 Hyland Ave., tacomaria.com

Crossing our fingers works! Broadway by Amar Santana is at last serving Sunday brunch. We can’t wait to sleep in and schlep to Laguna Beach for a three-course feast with choices that include seasonal fruit with yogurt, Parmesan-crusted chicken with rosemary waffles, and for dessert, salted caramel ice cream over a fudgy brownie, all washed down with a primo bloody, natch. 11 a.m. to 2 p.m., $39. 328 Glenneyre St., 949-715-8234, broadwaybyamarsantana.com

Members-only Balboa Bay Club now is separated, by name, from the Balboa Bay Resort, a AAA Four Diamond waterfront resort in Newport Beach. Most of us are long familiar with the 65-year-old establishment’s public dining venues, First Cabin and Duke’s, where we go to eat, drink, and gawk at yachts. But it’s nice to know the club’s private beach and spa await our application for membership when we’re ready to take the good life to the next level. 1221 W. Coast Highway, 949-645-5000, balboabayresort.com