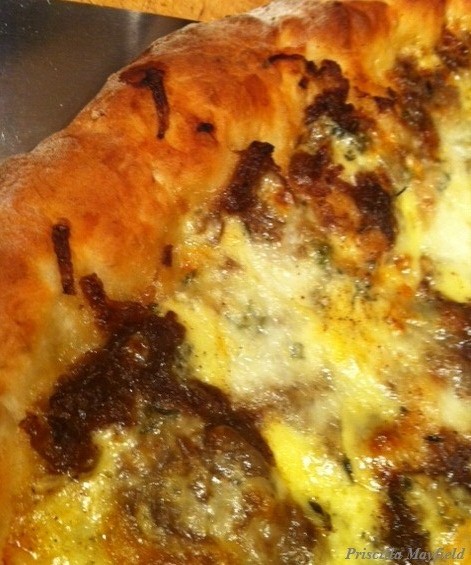 In our current Best of 2012 issue you’ll see a luxurious picnic spread on pages 68 and 69 that includes a few mouthwatering cheeses from Vin Goat in Corona del Mar. While all the fromage at Vin Goat is selected and handled with the utmost care, I’ve been especially impressed that the shop has a designated blue-cheese case, separately keeping the blues at optimum temp, and preventing them from accidentally inoculating the non-blues with their characteristic molds. If blue cheese is a favorite, it behooves you to visit. After stopping in the other weekend, I used the shop’s Rogue Creamery Smokey Blue ($28 a pound) in a favorite pizza topping combo along with caramelized onion and fresh thyme. I hadn’t tried the Rogue Smokey Blue before—it’s from Oregon, smoked over hazelnut shells. SO good. The Vin Goat guys recommend it for burgers—a perfect pairing.

The day we stopped in for cheese it turned out we were ravenous, or maybe it just seemed that way when we saw the new ciabatta-roll sandwiches. All three we tried ($8.50 each) were delicious. They’re made fresh, and change daily—a recent creation included pancetta, heirloom tomatoes, wild arugula, fresh burrata, and fig jam.

It was burrata, in fact—from Gioia Cheese of South El Monte, $14.99 a pound—that brought us to Vin Goat that Saturday, when we realized we needed it for a caprese salad planned using basil from our garden and the excellent tomatoes we bought at the nearby Corona del Mar Farmers Market. We originally bought the Rogue Smokey Blue for its aforementioned burger-worthiness, but it found its way onto pizza instead. Happens. And will likely happen again.