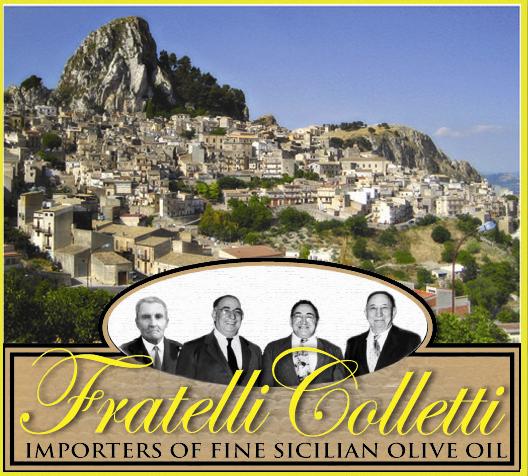 At the Newport Beach Public Library to hear Adam Gopnik of The New Yorker talk about his latest book, “The Table Comes First” (Knopf, 2011), I took the opportunity to acquire Gioia burrata from next-door Bristol Farms, and an enormous sourdough boule from Le Pain Quotidien in Fashion Island, just across the way. My plan was coming together. (More on Gopnik later.)

I’d recently taken delivery of a 3-liter tin of new-harvest Sicilian olive oil from San Clemente-based Fratelli Colletti. It’s buttery, a little green-tasting, not at all harsh. Just delicious. I’d been waiting for the 2012 harvest after the previous year’s sold out. This year’s may be even better, as George Colletti, one of the three fratelli who co-own the company, is hearing from customers. Colletti’s favorite way to consume his own oil is on a simple bruschetta―toasted or grilled bread, with a generous drizzle of olive oil and a sprinkle of sea salt. I love that. A couple of years ago at Zuni Café in San Francisco I had the restaurant’s special new-harvest oil in a starter called la fettunta, a thick, grilled sliced of bread fairly drowned in green oil and showered with flakes of sea salt. Of course, such a simple assembly is only as good as its ingredients, as you can imagine. When the elements align, there’s almost nothing better.

My bruschette, still super simple, had a couple of additions. After toasting a slice of the boule, I lightly rubbed one side with a cut clove of garlic before the initial olive oil drizzle. I dolloped on burrata, and salted and peppered. More olive oil, and a pause to admire the intense peridot color against the white cheese before devouring. I’ve recently added it as the final touch to pasta with roasted asparagus and a poached egg, and of course it’s a natural for that sort of finishing. But it’s also wonderful in a salad dressing for extra-good leaves, with nothing more than great-quality vinegar and salt and pepper.

You can find Fratelli Colletti’s 2012 harvest oil at Oliver’s Olive Oil in San Clemente, or online at the company’s web site, where you can also read the family’s story.