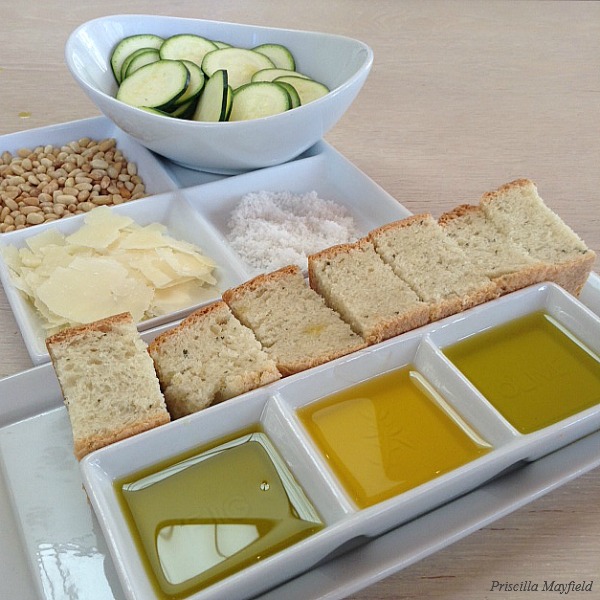 Executive chef Pascal Lorange oversees all six Fig & Olive restaurants, and was in Newport Beach recently looking in on his Fashion Island baby, only the second outside of New York. An L.A. outpost opened in 2011, and Chicago’s getting its first later this year. I imagine he was pleased with what he found. Even on a Tuesday afternoon, the bright, 12,000-square-foot space—encompassing patio, lounge, main “white room,” and more intimate wine bar—was hopping.

Some of us were there to take part in a cooking class with Lorange, in which he and corporate chef Simon Sunwoo led us through a few Mediterranean-infused dishes, including the signature zucchini “carpaccio,” very thinly sliced raw zucchini garnished with Parmesan cheese and pine nuts and drizzled with a lemon-olive oil dressing; fish en papillote with olive-oil seasoned vegetables; and a cold cucumber soup Lorange threw together quickly after deciding another course was needed to fill out the class carte. We tasted olive oils from Greece, Portugal, and California with the restaurant’s own rosemary fougasse bread. Butter is not banned, however—the dessert apple tart had a puff pastry base. Otherwise, though, it’s all olive oil, all the time, to the tune of 100,000 extra-virgin liters a year for the company, according to Lorange.

The zucchini carpaccio recipe follows—one of those super-simple dishes that ends up seeming like more than the sum of its few ingredients. If you don’t have a mandolin to make paper-thin zucchini slices (Lorange used a Japanese Benriner for the task), a vegetable peeler will work, which you can also use to shave the Parm. I like to salt the sliced zucchini slightly ahead of time, after arranging on the platter, so that it wilts a bit before dressing, but if you prefer it crisp, season just before serving. This is a perfect use for the Frieda’s pignolas I wrote about earlier, too.

Just before serving, whisk olive oil and lemon juice to blend, and drizzle over zucchini. Season with salt and pepper and scatter cheese and pine nuts on top.