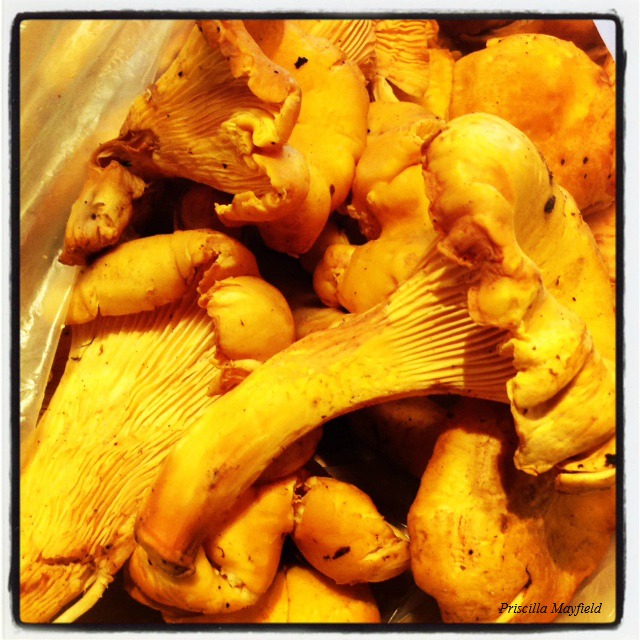 Cooking and eating with the seasons is all well and good, if you can stand the melancholy that descends when a fresh favorite inevitably passes into see-you-next-year status. Right now, it’s chanterelles.

Last year, I think I ran across fresh chanterelles a single time at Costco, and of course I bought them. The golden-tangerine wild mushrooms, a late-fall treat, are little seen in my regular shopping rounds. Or, were—this year, they transcended special-occasion status, since they seemed to be there all through November. Then, Jay Selman, who’s sort of a silent member of the James Beard Foundation Award-winning Grape Radio consortium responsible for Orange Coast’s “The Wine Dudes” blog, asked me if I’d seen the especially nice specimens at Grower’s Direct. I had not, but that was easily corrected when I purchased chanterelles at both the Costa Mesa and Aliso Viejo locations. At $13.99 a pound, they were more expensive than Costco’s $9.99, but either price is a stone bargain, considering they’re usually in the $20-plus range.

Selman says he likes to roast them, and I have to agree that that’s a great method. Trimmed and cut into pieces if very large, put into a vessel that just contains them, seasoned with salt and pepper, then into a 400-degree oven for half an hour or so—longer won’t hurt, and stir every now and then—they need little else. The idea is to get the mushrooms to give up their considerable liquid, which then evaporates, leaving concentrated flavor and tender results. At this point, they can be refrigerated, to be used wherever you would want to add mushrooms. If serving right away, stir in a couple of tablespoons of minced shallot and some butter, and check salt and pepper. Or, try the classic Italian funghi treatment of a little chopped garlic and a handful of chopped parsley, drizzled with olive oil.

Seriously—provided you salt and pepper them adequately, it’s hard to go wrong. The time is now, though, if you’re lucky enough to get some of the last we’ll see until next October. Bad weather in the Pacific Northwest has curtailed the 2013 chanterelle season. But don’t hesitate to dry-roast regular cultivated mushrooms, brown or white, the same way. Or use oyster or other fresh mushrooms you can find at O.C. farmers markets. During weekend cooking, do a pound or two to have fridge treasure for the whole week.

Now we just need Jay Selman to recommend a wine that goes with rest-of-the-year mushrooms.