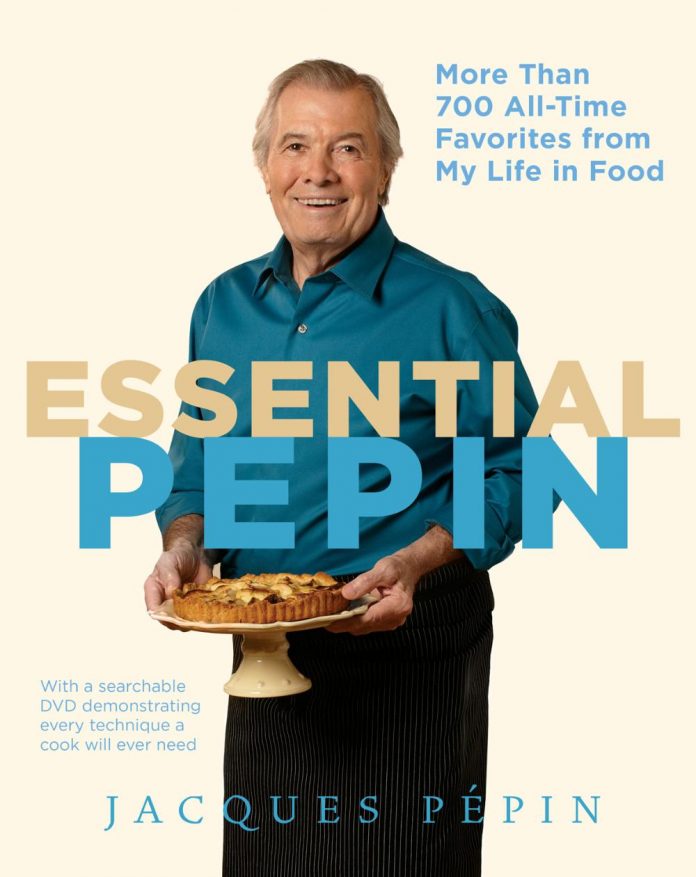 Among the current crop of cookbooks, Jacques Pépin’s “Essential Pepin” (Houghton Mifflin Harcourt, $40) might be the only one you’ll want to hug. And not just because of its irresistible, softly-padded binding and comfortable heft—what’s inside will inspire as much affection, though I have caught myself just carrying it around the house, now and then giving it a little squeeze.

Besides, there’s no pesky dustjacket! I love that cookbook publishers are opting out of them; my relationship with dustjackets has always been ambivalent. Other “naked” tomes I’ve reviewed recently are “Ruhlman’s Twenty,” by Michael Ruhlman (Chronicle, $40), and Mario Batali’s “Molto Batali” (Ecco, $29.99). You can read the review posts here and here.

But it’s what’s inside “Essential Pepin” that’s important, and there’s lots. The book’s subtitle says it all: “More Than 700 All-Time Favorites from My Life in Food.” (Included is a searchable DVD with the chef demonstrating techniques used in the recipes, a generous lagniappe.) When the 76-year-old Pépin refers to his life in food, he’s talking a 60-year career encompassing the full trajectory of modern culinary history. His devotion to teaching early on—in groundbreaking books on classic technique, on popular PBS cooking shows, and as dean of New York’s French Culinary Institute—has schooled professionals and amateurs alike. Pépin also has a master’s degree in French literature, and the charming illustrations in the book are his.

The introduction recalls Pépin’s autobiography, “The Apprentice” (Houghton Mifflin Harcourt, 2003), a must-read for any fan or, anyone interested in American culinary history—he’s our man on the scene at every sign post of the food revolution, with which his own story is inextricably entwined. In a way, “Essential Pepin” is the companion cookbook to the autobiography.

He endears himself to me by giving props to Craig Claiborne, the late New York Times food editor, whose contributions I consider criminally underappreciated: “There were fewer class differences in America, more time and more money. […] More than anything else, though, it was through the many weekends I spent at Craig Claiborne’s home in East Hampton that I learned about America. Cooking and eating my way through these weekends, I mingled with authors, artists, and doctors on an equal footing. It was an amazing time. I had been raised with the rigidity and discipline of the French kitchen, and now I was embracing American informality.”

All of this is reflected in the recipes. Classical preparations from Le Pavillon, the New York restaurant where Pépin was sous chef (his first job in this country), are represented, as are recipes from his childhood in France. His wife Gloria’s Cuban-Puerto Rican cooking is clearly a favorite, as is regional American. You can tell, just by scanning, that he loves leeks, scallions, and Tabasco. And watercress! How many cookbooks have 46 distinct salad recipes? A chapter on offal, with recipes presaging the current nose-to-tail trend, reminds us that very little is completely new under the cooking sun. Soups, all kinds of meat and poultry, fish dishes, pasta and grains, myriad vegetables, cakes, pies, tarts—there’s probably nothing Pépin hasn’t prepared, filtered through his own multi-culti sensibilities..

Even at 700, the recipes in “Essential Pepin” must be but a fraction of his repertoire. These are, however, his favorites, and that’s a pretty good recommendation.

I’ll offer a couple from the retro-classical side of the spectrum later in Taste of Orange County. (Update: You can read the recipe post here.)