Home Uncategorized O.C. Restaurants: In Fullerton, Early Bird Dinner is Not What You Think 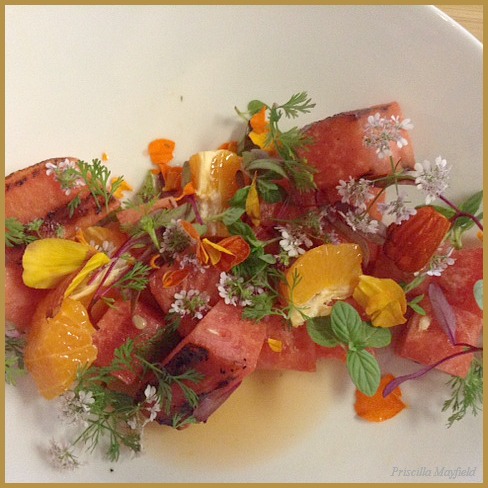 I’ve been watching for its dinner service to begin—was told it’s imminent, possibly this week—but in the meantime did the only sensible thing: I went to Early Bird for breakfast, the meal that (along with lunch) put the little Fullerton café on the map. Executive chef Frank DeLoach, known for his stint at Playground among other well-known restaurants, took the reins when founding chef Joseph Mahon left to concentrate on his downtown Fullerton Burger Parlor.

DeLoach loves Southeast Asian flavors and ingredients, which filter through the Southern-ish menu in a really good way. Not from the south himself, DeLoach nevertheless believes “Southern is the only true American regional cuisine,” a sentiment I share. My buttermilk fried chicken waffle with red-eye gravy ($9), had just-tender long beans mixed into the haystack of peppery salad on top—I love vegetables in my breakfast. My son had the “Real-Deal Holyfield” steak & eggs ($15.50), two over-easies and a perfectly rare-as-ordered small rib eye garnished with mushrooms, caramelized onion, asparagus, and delicious smoked-tomato béarnaise.

We also tried a waffle from the chalkboard specials, with DeLoach’s Malaysian rendang curry. Braised to a fare-thee-well is what you expect from correctly-prepared pulled pork—but you likely would not anticipate the complex rendang seasoning. DeLoach makes his own curry paste with a mortar and pestle, which he prefers over a food processor. I hope this dish jumps from the chalkboard to the regular menu. I wouldn’t be surprised if it made an appearance on the developing dinner menu.

I also loved Early Bird’s watermelon salad ($8) with grilled and raw melon, tangerines, and a mysterious, salty-spicy-sour-sweet dressing made with fish sauce and Thai bird chilies. (A version with watermelon and tomatoes is a possibility at dinner, DeLoach says.) He serves excellent Bodhi Leaf coffee, with beans delivered fresh daily. When I was there they were brewing beans from El Salvador, lucky for me; I love Central American coffees.

On a grey weekday morning, the place was full, making me think that I’m not the only one waiting on Early Bird dinner.