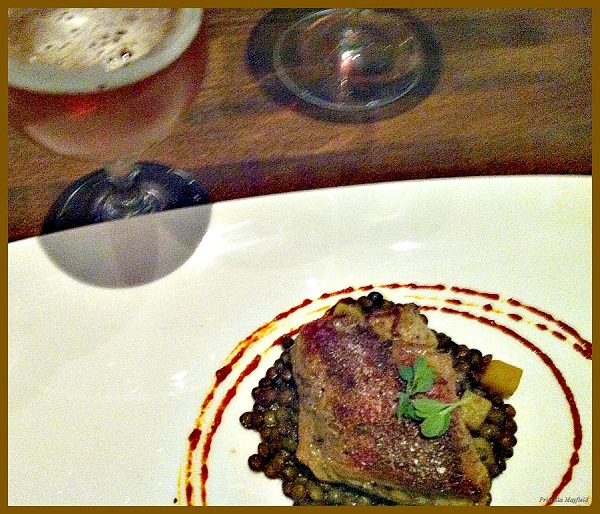 Even on a random Tuesday night in Old Towne Orange, Haven Gastropub’s hopping. Where was this place, so conveniently open until 2 a.m. daily, when I lived in Orange for more than a decade? No matter—it’s here now, and packed, from patio to bar, where sports fans whoop, a happy noise that doesn’t keep diners elsewhere from conducting lively conversations.

I stopped in for a preview of chef-partner Greg Daniels’ new fall menu, which is chock full of seasonal ingredients and the sometimes-surprising twists that have become the gastropub’s signature.

For instance, a lamb belly dish ($22) that’s a collaboration between Daniels and new chef de cuisine Craig Brady is cooked sou-vide with vadouvan, a French-influenced curry seasoning. The meat is succulent under a thin fat cap that’s aerated to a fabulous crisp by thorough searing. The lamb is served on a bed of lentilles de Puy mixed with spiced rutabaga in perfect dice. How often to you see rutabaga—one of my favorite vegetables—on a menu? The lentils were perfectly cooked; for some reason, I’m always served chalky, undercooked lentils in restaurants. Chef Daniels noted there are other green lentils from France, but Haven uses real-deal de Puy, which he finds have the best texture. Thin lines of rich blood-red, house-made harissa—the pub’s chile de árbol take on the Moroccan hot sauce—encircle the arrangement, allowing diners to customize individual bites with as much, or as little, heat as they like