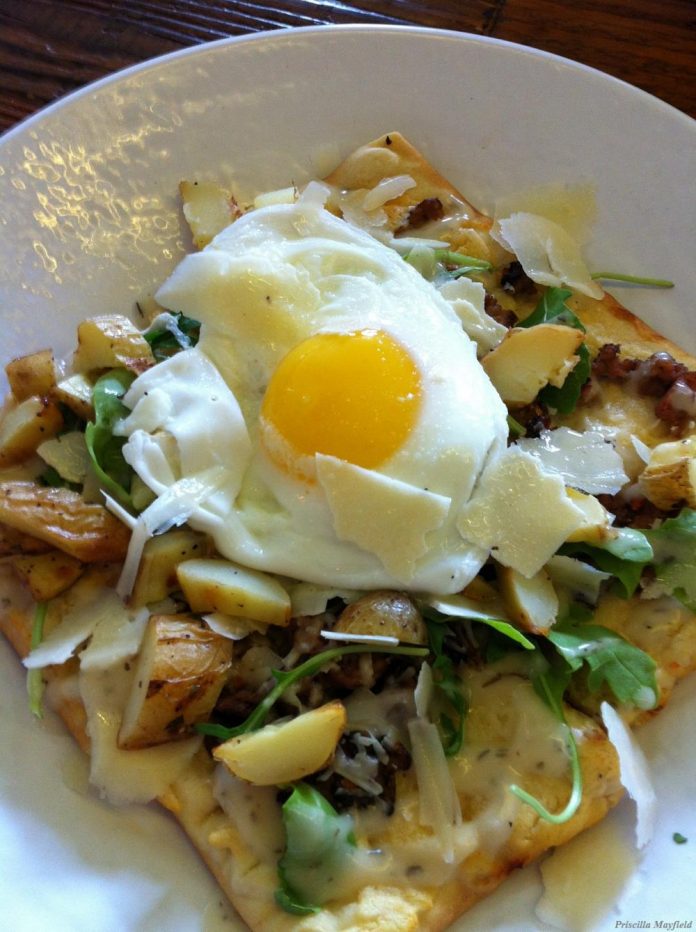 The Orange County outpost of high-end healthful Greenleaf Gourmet Chopshop is such a good fit for its Costa Mesa neighborhood that it kind of seems it’s always been there, even though it’s still quite new. The large, airy, indoor-outdoor space is extremely fresh and welcoming, and once inside, you forget busy 17th Street is right outside. Vegetables flourish in the garden borders, under the stewardship of Newport Beach-based organic garden service Harvest to Home, adding to the suburban-oasis feel. Regulars run in for a cup of Lamill Coffee or something from the juice bar that, like the gardens, is exclusive to the O.C. Greenleaf. (Other locations are in Beverly Hills and Century City.)

A newly instituted Wednesday wine night has two seatings on the courtyard patio, 5:30 and 7 p.m., where for $20, themed tastings are served with small-plate appetizers. Featured wines will be available at deep discount: 25 percent off single bottles, 35 percent off six, and 45 percent off cases. Reservations for wine nights are required—call the restaurant, 949-200-3950.

Breakfast at Greenleaf is also new—at a recent preview, sandwiches and wraps, and a breakfast pizza with goat cheese and a sunny-side-up egg, were pretty delicious. The cheap n’ easy morning muffin (actual name; $4.50), has egg and bacon on a whole-grain English muffin made for the restaurant by Dolce Forno bakery, as are most of the other breads. The grain- and seed-studded bread for the breakfast sandwich is a standout—and holds an incredibly hearty assemblage of grilled chicken, portobello mushroom, egg whites, cheddar cheese, and spinach ($10). The whole-grain tortilla for the breakfast burrito and similar protein wrap (egg whites, grilled chicken, turkey bacon, red onion marmalade, and spinach, $6) was without a doubt the best whole-grain tortilla ever. Not that there’s been much of a contest—everybody knows whole-grain tortillas are generally pretty awful. Greenleaf spent six months developing theirs, with longtime Los Angeles tortelleria La Reina. It’s properly stretchy and thin, and, adding to the delicious shock, is just 110 calories. (Seriously—try it.)

From the juice bar, I tried the medium-green Pina-Kale-Ada ($5.95), and setting aside for the moment my feelings on wordplay, I loved this concoction of grilled pineapple, kale, apple, and lemon juice. It was light and sippable, with pineapple’s tropical perfume. Executive chef Kristy Ritchey said customers at the restaurant’s comfortable wine bar sometimes order a Pina-Kale-Ada and add a hit of soju. I can totally see that. Ritchey’s working on tapas, too—coming soon to the wine bar. Something else to keep in mind, especially nice in a neighborhood where parking is at a premium: Call for takeaway, park in the designated spot in the small lot behind the restaurant, and your order will be brought to your car.