Home Uncategorized Cooking gear: The world of cookware is in your computer—and right next... 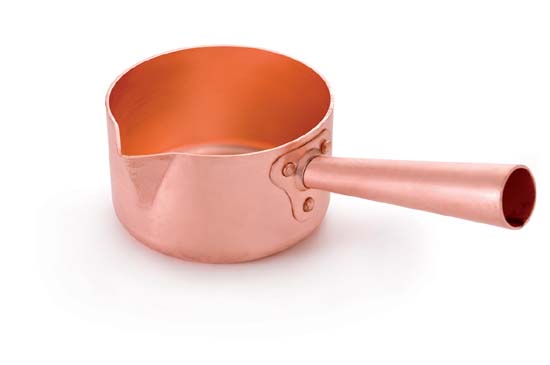 I love the democratic access we have to fine kitchen tools, yet another huge, collateral benefit of the ongoing food revolution. I haven’t forgotten when mainstream stores didn’t carry All-Clad and Le Creuset, when Sur La Table was still a single, utterly fantastic store at Pike Place in Seattle that almost rivaled Dehillerin of Paris. Over the years, both were responsible for many bulky, precious packages carried home by hand.

While I doubt I’ll ever stop bringing home cooking-related stuff from travel because, well, because it’s what I do, I have happily embraced this New World of Cookware. My very first Internet foray, the moment my husband (the professional IT person keeping us up to date on the domestic side) connected the dial-up and told me what to do, was testing to see if I could solve a then-current problem: Finding an unlined French copper sugar pan.

OK, Internet, show me what you can do, I said. And it did very well… in just a few minutes I located my pan, in two sizes, at Fantes in Philadelphia, a restaurant supply in business since 1906. Somebody at this venerable business was smart enough to be an early adopter of online shopping. So, yes, my very first Internet act was locating an esoteric piece of cookware.

Start as you mean to finish, as the saying goes. A couple of years ago, in search of a certain type of Zyliss kitchen shears, I made my usual survey of available online sources, including Amazon, a favorite which hardly ever lets me down. But this time I did best at an impressively-stocked site called Chef’s Resource. I got my shears in record time, in the process discovering that this business was headquartered in Laguna Hills. There’s no storefront other than virtual—Chef’s Resource could have been anywhere, as far as my shears were concerned. But its Orange County origin is certainly relevant to ToOC’s interests.

Chef’s Resource was founded in 1999 by Rick Smith, a former computer consultant and life-long serious cook, who lives in Laguna Beach with his wife and two boys. He’s just returned from a big trade fair in Frankfurt, scouting new stock. Smith says, “I’m excited about some of the more interesting things I can bring in, because I’m a foodie. I can cook. They aren’t just widgets to me.” This may or may not be related, but Smith’s entry in the Laguna Beach Little League chili cook-off was a Spanish-inspired lamb-and-chorizo riff with smoked paprika. (In a field of 13, his was voted “Most Creative.”)

At home, says Smith, “I grill a lot—tri-tip is a favorite, usually with a dry rub of kosher salt, pepper, onion powder, and garlic powder. It’s actually even better the next day sliced thinly. I also make a pretty good grilled leg of lamb. And I do like slow-cooked, braised food, like braised lamb shanks. Good comfort food.” (I’ll be posting Smith’s tri-tip recipe, including a special horseradish sauce for the aforementioned next-day’s thin slices, in a near-future ToOC.)

Chef’s Resource has a good selection of the familiar, but also some unusual and intriguing exclusives. “I’m the only buyer,” Smith says, “and these are the things that caught my eye and made me want to add them.” But kitchen workhorses are represented, too. “We do a lot of business with Le Creuset and All-Clad,” Smith says, and cutlery is a particular emphasis. “We have more than a thousand cutlery-related items—a general favorite is a good-quality Japanese knife, like a Shun chef’s knife or santoku.  Good stuff just lasts.”

That’s not only true for knives, but for any component of your  batterie de cuisine. (OK, except for maybe the odd non-stick sauté pan—a story for another time.) And in the New World of Cookware, no need for a trek to Seattle or Paris—you can import the good stuff from Chef’s Resource right through your keyboard.