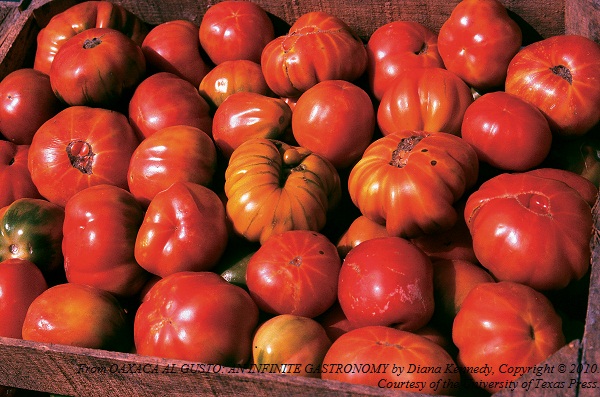 And now, as indicated in yesterday’s post, a taste of Diana Kennedy’s new “Oaxaca al Gusto: An Infinite Gastronomy” (University of Texas Press, 2010)—not a mole, although of course in a book of Oaxacan cuisine we can assume moles—but a savory, long-cooked beef and potato dish to serve with tortillas, and a simple accompanying table sauce, one of three possibilities recommended.

So good. And the sauce! One of those deceptively simple things that is way more than the sum of its component parts—when I made it I used jalapeños, 10 or 12, and a little more than a pound of tomatoes from the farmers market, which at this time of year even from this source are not superripe. Applying a little heat, as in the brief simmer called for in this recipe, elevates any tomato a bit. I’d never made a cooked tomato salsa like this, but I certainly will going forward.

A note of grave importance: Do NOT skimp on the crunchy chopped white onion if you make tacos with the finished bistec and sauce, which is what we did at my house. Be ready with lots—I had to quickly chop more partway through the meal because it was such a necessary complement.

I used the small coffee grinder I have dedicated to spices for the allspice and peppercorn mixture. You could certainly use a mortar & pestle. Also, I cooked the dish in a covered enameled cast-iron pot in the oven, rather than on the stovetop—I like this for anything that needs long cooking at a steady temp.

This recipe has been handed down for several generations. Like all simple recipes, so much depends on the quality of the ingredients. It is served with tortillas and either a tomato sauce or a sauce made with dried chilies.—Diana Kennedy

Grind together the allspice, peppercorns, and salt and mix with the vinegar and water. Rub the mixture onto the surface of the steaks and set aside to season for about an hour.

Heat the lard in a large, deep skillet and fry the onion, without browning, until translucent. Remove with a slotted spoon and reserve. In the same fat, sear the steaks quickly over high heat and remove.

Layer the steaks with the potatoes, onions, parsley, and pan juices. Cover the pan and cook over very low heat until the juices have been absorbed, about 1-1/4 hours, basting the meat with the juices from time to time. (Don’t try to speed up the cooking) It is always best to let the dish sit for a short time before serving to allow the flavors to intensify.

This sauce has a distinct flavor when made with the local tomatoes, criollos or tomates rojos tecas (see photo). In appearance, they are like a very small beefsteak tomato with their undulating surface; they are thin skinned, very juicy, and more acidic than the normal Roma-type more commonly used. .—Diana Kennedy

Jalapeño or other hot green chilies to taste

Put the tomatoes and chilies into a small pan, barely covered with water, and cook over medium heat until soft, 10 minutes. Strain, reserving the cooking water, and put into the blender jar with the garlic and salt to taste. Blend to a textured sauce, adding a little of the cooking water if too thick. To serve, sprinkle the top with the chopped onion.

From “Oaxaca al Gusto: An Infinite Gastronomy,” by Diana Kennedy, Copyright © 2010. Courtesy of the University of Texas Press.