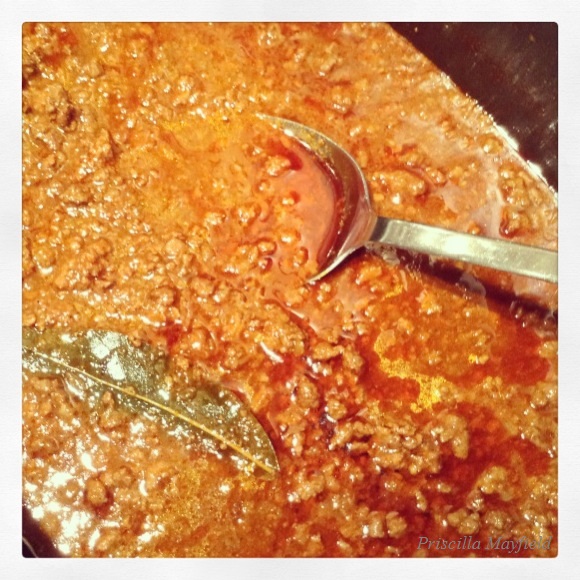 Ever since reading Calvin Trillin on the subject, I’ve been intrigued by Cincinnati chili, a dish that’s sort of chili and sort of, well, something all its own. I recently got to try it for the first time, made by native Ohioan Marisa O’Neil, public information officer for OC Parks. Marisa and her 11-year-old son Liam are Trabuco Canyon neighbors of mine, and we had the chili for one of our “Downton Abbey” Sunday evenings, after the traditional G&Ts—gin and tonics. There’s just something about “Downton” and O.C., as I wrote previously in Taste of Orange County.

Not to mention, something about that chili. It is delicious. Supposedly created by a Macedonian immigrant restaurateur with a touch of the sweet spices allspice, cinnamon, and cloves, plus a little bitter chocolate, it’s more a savory sauce than the standard bowl o’ red. This makes perfect sense, because Cincinnati chili is traditionally served over spaghetti, with optional additions taking off from there. Chili on spaghetti is two-way. Three-way adds grated yellow cheese; four-way, onions; and five-way, kidney beans. With multiple additions, it’s like a looser, chunkier, snappy-flavored Bolognese. Really good.

Marisa’s Cincinnati chili has her personal customization as well: grass-fed beef. She’s a serious CrossFit athlete—like handstand-pushup serious, I mean—and tends to eat Paleo, with the occasional exception for Costco pizza. She makes her chili in a Ninja cooker, which sautés as well as slow cooks, but a regular slow cooker works great after the initial stovetop browning. The aforementioned Costco is also a good source for both grass-fed ground beef and chili powder.

Serve on hot cooked spaghetti with choice of additional toppings.