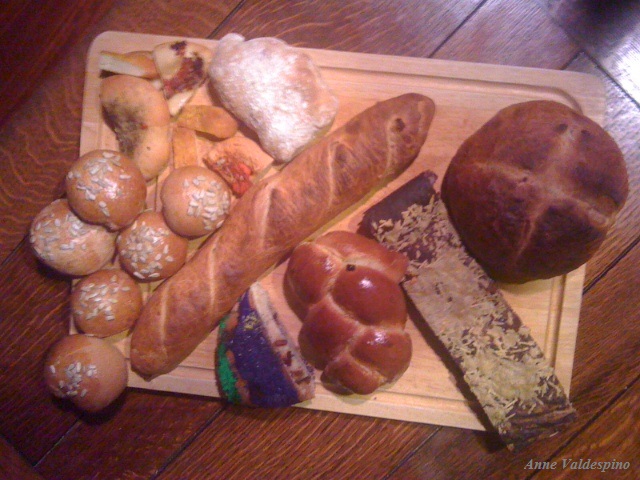 “I love Rachel’s classes because they’re very low-key,” Anne says. “She knows all the technicalities of everything she bakes, but doesn’t bog you down with too much science. She has a fun and funny presentation every time, and lets the students call the shots on which recipes they want to bake, and even lets us tweak them and work with special ingredients of our own choosing, so it’s very creative.” She also likes that students get to take their “work” home with them.

As a bread-making obsessive, I had to ask Klemek about her sourdough starter. Turns out it’s been going for 10 years. “It consists of equal parts bread flour and water, and serves as an environment for the natural yeasts in the air,” she says, adding, “Sourdough starter adds lots of flavor and an increased shelf life.” (Hmmm… guess I’m not the only bread obsessive in O.C.) It’s in the marble focaccia, whose Marché Noir cabernet flour is made from the lees (sediment) remaining after wine is pressed. It’s available at the bakery and online, and chardonnay flour is coming soon, too.

Blackmarket class subjects range from savory bread, pizza, or pastas—as Klemek says, pasta is a dough, right?—to  a two-part cake-Stravaganza, and Mastering Croissants and other butter-laminated doughs.  “We have a great, diverse array of classes,” Klemek says, “for those with beginning, intermediate, or advanced culinary experience. Everything the students produce is made by them, from scratch.” Click here for a complete list of upcoming Blackmarket classes.

As Anne says, and as all Blackmarket fans know, what sets the bakery and classes apart is Klemek’s personality and integrity. I love what she says about her classes, which is maybe an even more important takeaway than the delicious pastries. She’s there to provide guidance, but “with a sense of humor and intense belief in the power of real food prepared well.”