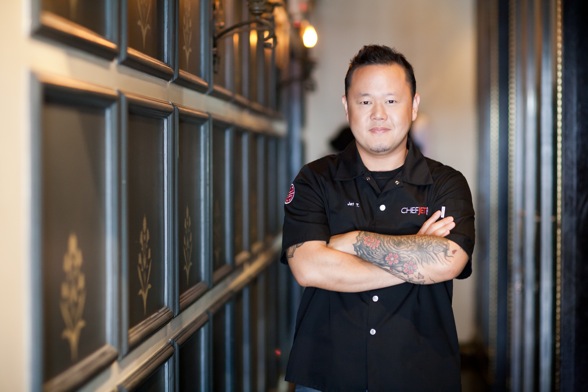 You may have seen chef Jet Tila on “No Reservations,” squiring Anthony Bourdain around Hollywood’s Thai Town, or on “Iron Chef,” battling Masaharu Morimoto. He’s also a restaurateur, most recently opening The Charleston in Santa Monica. Years back, I used to look for his byline in the Los Angeles Times food section, where he says he made himself “the intern who wouldn’t leave.”

Tila now adds radio show host to that list. “The SoCal Restaurant Show” premiered last Saturday on Anaheim’s AM 830 KLAA, with lively conversation between Tila and his friend (and former student, it turns out) Aarti Sequeira, winner of “The Next Food Network Star” and host of “Aarti Party.” Tomorrow, Susan Feniger, chef-owner of Street and half of the “Two Hot Tamales,” will be his guest.

Tuesday night at The Winery in Tustin, Tila and Winery chef-owner Yvon Goetz served a few dishes, some from Tila’s repertoire and some (notably the dependably FAB “Alsatian pizza” flammenkuche) from Goetz. From The Charleston menu, Tila’s chicken and waffles was stupendous—the chicken was absolutely crisp and suffused with flavor, thanks to vacuum-sealed buttermilk brining. Maple syrup, sriracha, and butter combined in the irresistible spicy-sweet sauce.

Tila’s Orange County connections go further than his Anaheim Stadium broadcast studio. His family owns the venerable Royal Thai restaurants in Laguna Beach and Newport Beach, where he’s worked since childhood, starting as a dishwasher. Tila’s deep cooking chops are obvious, but he’s also got a great radio voice. I LOVE food on the radio—and, as I’m sure others do, catch up via podcast while cooking. “The SoCal Restaurant Show” is now added to my listening list; 10:30 a.m. to noon, Saturdays, AM 830 KLAA. Podcasts and downloads are available on the website, and you can listen live online at 830am.com.