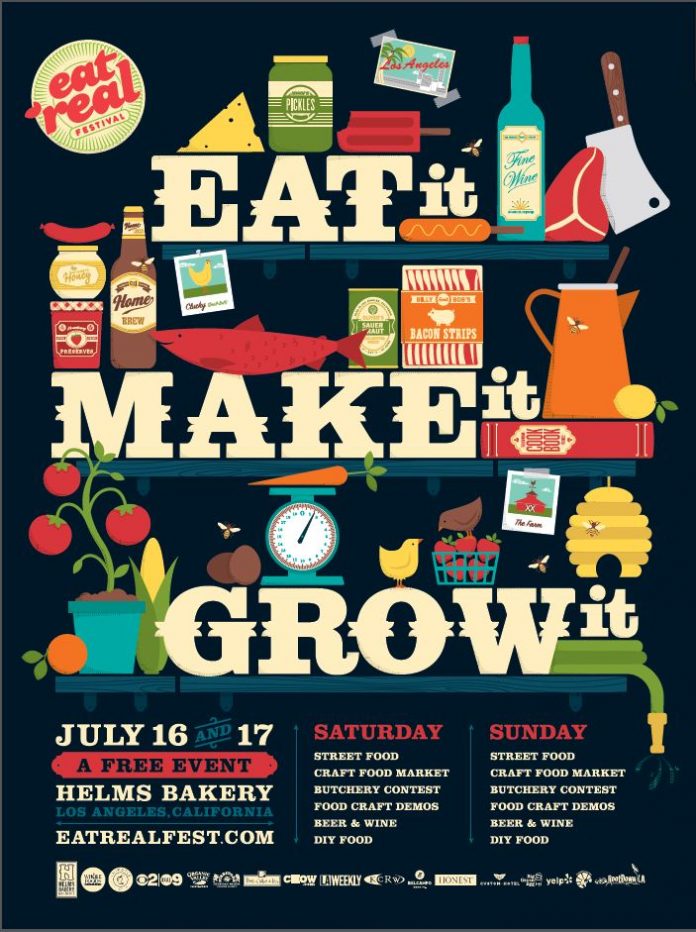 Yes, this is the weekend of so-called “Carmageddon,” although I agree with chef Rachel Klemek of Blackmarket Bakery in preferring the “Carpocalypse” monicker for the long-planned, much-feared 405 freeway shutdown. Yet, a goodly contingent of Orange County foodists will be trekking to L.A. despite the likelihood of added aggro.

The draw is the inaugural L.A. Eat Real Festival in Culver City, an ambitious, two-day, totally free food-centric event showcasing all related facets, from growing to consumption, with an emphasis on the continuance and transmission of traditional skills. Orange County’s own Delilah Snell, owner of Santa Ana’s The Road Less Traveled, is managing the whole shebang, which in Oakland where it originated two years ago drew some 30,000 people. Snell, known for the twice-yearly Patchwork craft fests she organizes with her niece, Nicole Stevenson, ran farmers markets before opening her Santa Ana store, and sells artisanal preserves under her Backyard in a Jar label (featured in the May Orange Coast). This all adds up to relevance: “I’ve done all these things, at different times—OK, maybe I never organized a butchery contest before, but I just figure it out from the ground up,” Snell said.

With all that’s involved managing a happening of this size, Snell’s biggest worry turned out to be one completely outside her control, the 405 closure. She evinces some optimism, though. “I think it’s going to be just like during the [1984] L.A. Olympics, when everybody thought it was going to be crazy, and the streets were just dead,” she said. “It’s not an event where you come for just an hour,” Snell pointed out. “You pack up the family and spend the whole day!”

Delilah Snell wasn’t kidding about butchery contests, either—there are in fact two on the Eat Real docket: steer on Saturday and pig on Sunday. The festival’s easy-to-navigate website has detailed info on all food-skill demos and hands-on activities. Street-food carts and food trucks will sell sustainably-produced food, with no single item costing more than $5. See the list of all food vendors is here. Did I mention wine and beer and those that make them? Wine/beer/beverage list here—and look for the free “hydration station” for water-bottle refills. Food crafters selling their own wares are listed here—among them Deanna Moore of Santa Ana-based Chocolatl, the delicious, artisanal raw-chocolate products that appeared in June’s Orange Coast.

In addition to all that, I’ve been madly sending my heartfelt wish for ease of ingress over the psychic transom, as getting from here to there in a civilized manner is relevant to my interests—I’ll be at Eat Real as one of the judges for the DIY preserves, pickles, and salsas contest. See you there?