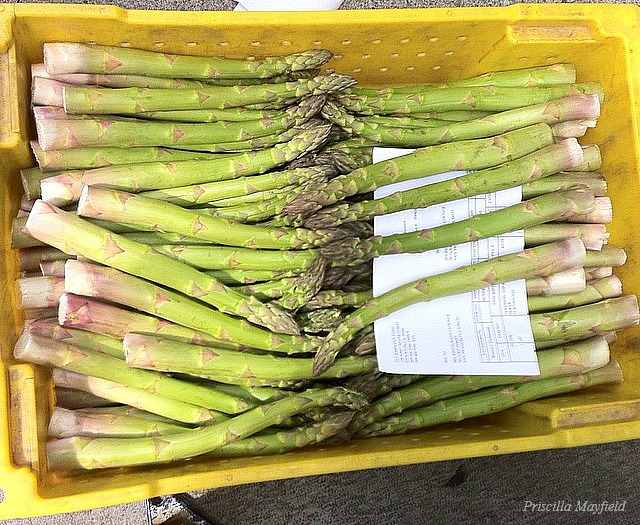 Despite their somewhat exaggerated historical rivalry, Northern and Southern California do have things in common. Zuckerman asparagus, for instance. Grown in the San Joaquin Delta, it’s a treasure upon which everybody agrees, and each spring their jumbo spears are eagerly awaited by home cooks and chefs up and down the state. In Orange County, Zuckerman sells asparagus (and fabulous potatoes) at two Saturday farmers markets, Irvine and Corona del Mar.

Last weekend at San Francisco’s Ferry Plaza Farmers Market, waiting for my Blue Bottle pourover au lait, I idly surveyed the next-door Zuckerman stand, and the bin of big stalks in the photo caught my eye. Wow! If the asparagus I get at O.C. markets is jumbo, these had to be something like superultrajumbo. The sales guy told me they were 10-12s, denoting length in inches, as opposed to the bunched 8-10s I can buy, and they were destined for a restaurant kitchen. He wouldn’t say which one, but noted they supply many in the city, including Market Café at the Ferry Building, plus Waterbar and Bix. This market has the reputation of being expensive, but I noticed that Zuckerman’s price was the same as I pay in O.C., $3.50 a bunch or two for $6—a stone bargain.

Take a look at our searchable guide of all Orange County farmers markets here, and more on asparagus here and here.