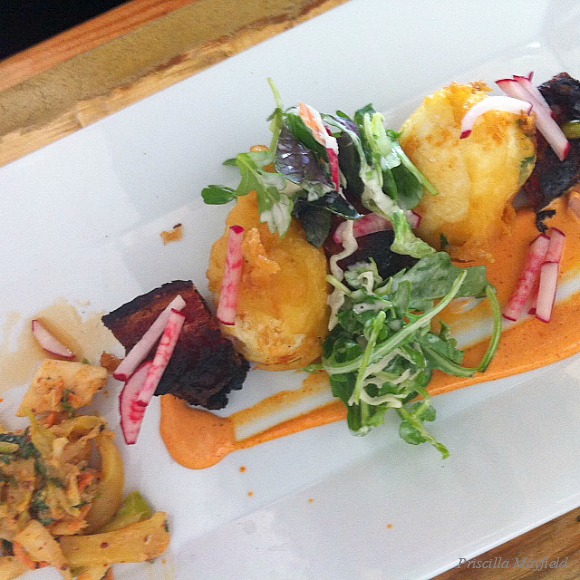 It was spelled out on the top of the menu at Break of Dawn Sunday: Three months and 15 days. That’s how long it took chef-owner Dee Nguyen to build out his new space, which means it had been that long since fans of the wildly popular Laguna Hills restaurant were able to enjoy Nguyen’s unclassifiable, irresistible breakfast and lunch fare. The new location is just a stone’s throw from the old, which is in a part of Oakbrook Village Shopping Center that’s being razed to make way for multi-family housing. How lucky would it be to live next door to Break of Dawn?

At the Father’s Day reopening, many in the crowd were fellow chefs, denizens of the O.C. foodosphere, and Break of Dawn superfans. There are a lot of the latter—the restaurant seems to make instant regulars out of first-time visitors. It made a fab Dad’s Day outing for my family, but who’s to say whether it was the celebration or the return of tempura eggs that motivated us? I had a favorite, sausage and rice ($13), the dish I’d been thinking of for those three-plus months. Like everything on the menu it’s described simply but delivers layered surprise and delight: Hawaiian sausage, green papaya, hijiki, scallion, fried eggs (I swapped in tempura eggs—I mean, three months). My son’s breakfast was beef brisket ($18), which in Nguyen’s chef mind also includes tongue ragu, ginger, king oyster mushroom, and merlot poached eggs. My husband tried a new dish, bacon and eggs ($13), which pairs Nguyen’s incredibly juicy, meaty, house-cured pork belly with the aforementioned tempura eggs, napa slaw, and kimchi-spiced crema. Hungry again just typing that! When I asked Nguyen if the prawns with rice (another favorite) were coming back, he mentioned possibly doing something with shrimp and polenta. I immediately picture a shrimp and grits trip put through the Nguyen filter, and can’t wait to try it.

Danny Godinez, chef-owner of Anepalco’s Café, was there with his wife Amaryllis and daughter. In addition to two Anepalco’s, Godinez will be adding, possibly as soon as late fall, El Mercado Modern Cuisine in downtown Santa Ana. And I missed Harrison Kho, who was there later with his wife and three little girls. His Irvine Harry’s Deli has been on fire-induced hiatus, but Kho hints that the wait for his sumptuous sandwiches and otherworldly onion rings might be nearing an end. Please?

Baker-to-the-O.C.-stars Dean Kim was there with his wife Ming, having breakfast between fielding phone calls from clients calling for Sunday morning bread reinforcements. Kim and Nguyen go way back, and at Break of Dawn’s 2006 opening Kim was his friend’s very first customer. Kim made sure this history repeated itself on Sunday—he was first again, at the restaurant’s new incarnation.