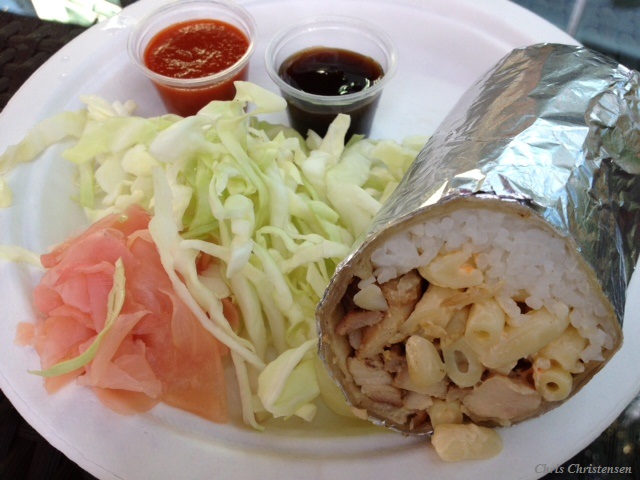 At a recent grilling contest Orange Coast Senior Editor Chris Christensen judged, the winner was a multi-culti, all-in-one, SoCal special. She got its story—and the recipe—for Taste of Orange County.

Michael Kinder, 31, an amateur cook who learned his way around the kitchen as a “latch-key kid,” kick-started his summer with a big win at Bistango restaurant’s Great American Grill-Off. “I was a little nervous—I’m not gonna lie—because I’ve never done anything like this,” says the San Juan Capistrano resident whose Hawaiian BBQ Burrito beat five other amateur cooks’ specialties on a sunny Friday at the Irvine restaurant. “I’m just glad the judges liked it.”

What they liked—and I say this with certainty as a judge—was the straightforward goodness of his take on the typical Hawaiian plate lunch, which Kinder got hooked on at L&L Hawaiian Barbecue joints he frequented in L.A. in the 10 years he lived there.

“They typically serve the dishes with sides of rice and macaroni salad. It’s like a bento box,” he says of the fusion comfort food that draws inspiration from Asian and American fare. “But when I moved to Orange County, I couldn’t really get this food anywhere so I just started making my own. I got better and better at it, and finally took it a step further and made a burrito out of it.”

So now it’s Asian and American with a SoCal spin.

So, while Mike’s out there scarfing down his prize—$1,000 in free meals from Bistango and its siblings Bayside and Kimera—the rest of us can fire up the grill for his tasty winner, which wraps the rice and mac inside the burrito with chopped marinated chicken. He serves it alongside shredded raw cabbage, and pickled ginger, with little cups of Sriracha, and his secret Asian dipping sauce (sorry, he won’t share that recipe).―Chris Christensen

2 cups medium-grain rice (I use Calrose, a sushi-grade)

Meanwhile, combine rice and water in a saucepan, and salt if you like; bring to a boil, cover, and simmer for 18 to 20 minutes. Sprinkle rice vinegar over, and toss to blend.

Warm the tortillas. In the center of each, lay down a layer of rice, then a layer of macaroni salad. Top with shredded chicken. Roll into burritos. Serve with Sriracha.