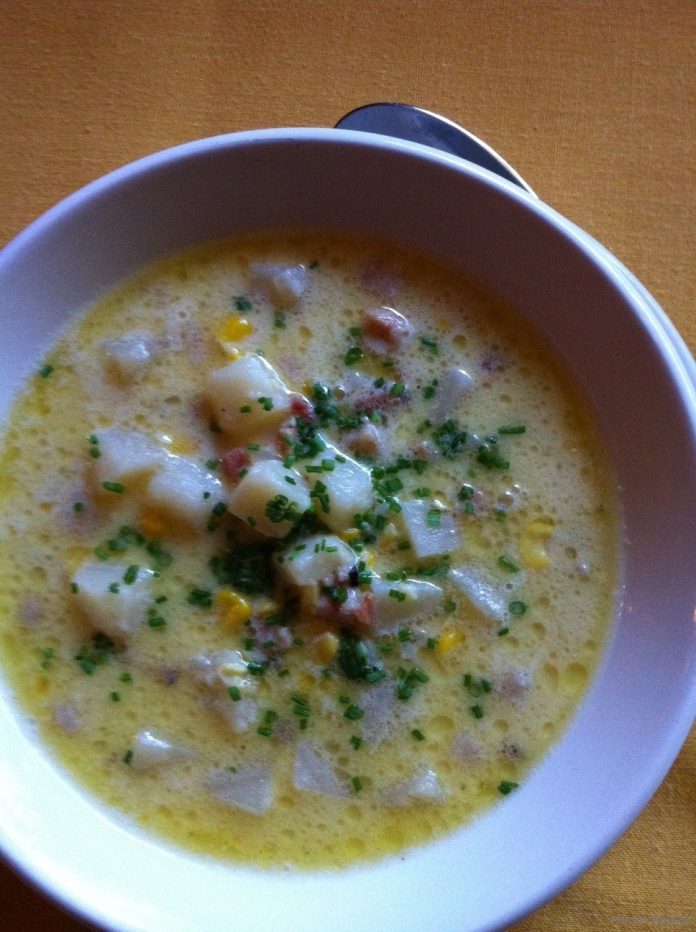 Like the asparagus I wrote about in spring, summer’s fresh sweet corn enjoys a sort of can-do-no-wrong honeymoon in my kitchen when it’s simply served on the cob, lavished with butter and salt, many, many times before I start to monkey with it. And as with asparagus before it, it takes a while. We’ve enjoyed lots of Manassero Farms’ delicious white corn just this way so far this summer. It seems to be an especially good year for corn, something that is relevant to my interests: corn is one of my top five foods.

I realized that I’d passed into monkeying-around when my first thought upon seeing beautiful bi-color corn on Meños Farms’ table at the Newport Beach Farmers Market last week was CORN CHOWDER, instead of BRIEFLY BOIL, SLATHER WITH BUTTER, SHOWER WITH SALT. Yep, monkeying-around time is here, all right.

And so corn chowder came to pass. Corn chowder, with bacon, potatoes, and onion, makes great use of fresh corn flavor and texture. I love to use corn stock, made from the cleaned cobs, in this—it adds even more sweet, clear corn flavor. If you’re ready to monkey around with the beautiful fresh corn available at supermarkets as well as farmers markets and farm stands like Manassero’s, maybe this simple classic would make a good jumping-off point for you, too. It’s a slippery slope, though. What’s next? Corn salad with roasted red peppers? Corn pudding (extremely likely­), or go-for-broke corn fritters? Could happen. Nothing at all wrong with an extended or late-starting or even a renewed honeymoon, either.

Cut kernels from ears of corn. With back of knife, scrape remaining flesh and juice from cob, combine with kernels, and set aside. Break cleaned cobs in half and reserve.

Cook diced bacon in heavy, 4- or 5-quart pot over medium heat, stirring occasionally. When sizzling, turn heat to low, cover, and cook slowly for 10 or 15 minutes, stirring from time to time, until almost fully rendered but not crisp. Add onion, increase heat to medium and sauté a few minutes, until translucent.

Stir in corn kernels and any juice, potatoes, generous teaspoon salt, several grinds black pepper, and pinch of cayenne. Add corn stock. Vegetables should be just covered with liquid; add water if necessary. Bring to boil and immediately reduce to simmer. Cover and cook 30 minutes or until potatoes are very tender, stirring occasionally.

Check seasoning before serving, and garnish with chives, if desired.