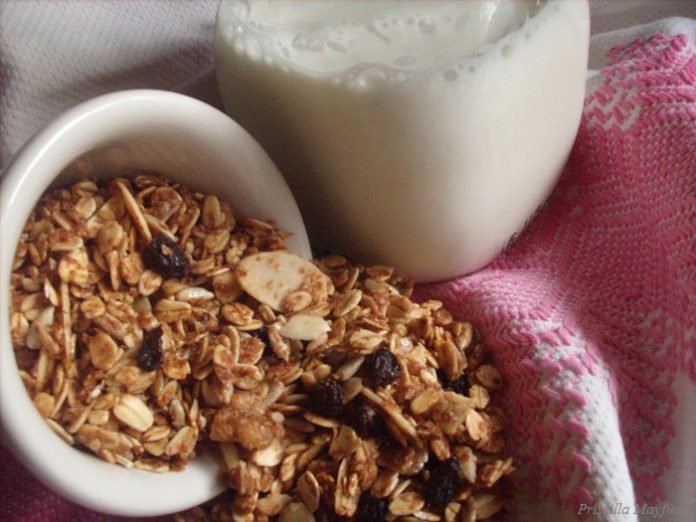 And now for something completely different. What might be considered a bonus recipe from Eric Ripert’s “Avec Eric” (Wiley, 2010), a decided contrast to the one for whole roasted snapper that I prepared with a fish selected for me by Ripert last week. So: Honey Granola.

I hadn’t made granola in years and years, but the idea of an Eric Ripert granola amused me and piqued my interest. Plus, honey is one of my favorite things ever. And, I had found myself standing pretty much right in the middle of Whole Foods Huntington Beach’s bulk section, hadn’t I, where putting the ingredients together took a couple of minutes. I used my usual grapeseed oil instead of the canola in the recipe, and also heated it very slightly with my favorite Honey Pacifica raw sage honey and sea salt to easify mixing. I baked mine a little longer than the 30 minutes indicated for increased toastiness, maybe 40 or 45 minutes. If you plan to do the same, don’t increase the oven heat to speed the process, though—the low temp Ripert specifies preserves more nutrition in the nutrient-dense (and wildly calorific, like all granolas) mixture.

A near-perfect use of honey, and all those other good things in there, too. Does not take a towering intellect to see that this delicious granola would make fabulous last-minute Christmas gifts. Just be sure to make enough for your own use as well.

One of my favorite things to eat for breakfast is dried fruit and yogurt. This granola is made with honey as the sweetener and is full of seeds, nuts and dried fruit. Try it with yogurt or by itself as a snack.—Eric Ripert

1/2 cup mixed seeds, such as flax, pumpkin, sesame, and sunflower

1/2 cup nuts, such as almonds, hazelnuts, pistachios, and walnuts

1/2 cup mixed dried fruits, such as raisins, cherries, and apricots

Bake granola, stirring occasionally, for 25 to 30 minutes or until golden brown. Remove from oven, fold in the dried fruits, then spread granola out again. Let cool completely, breaking up any large pieces. Granola will keep, stored in airtight containers and placed in a cool and dry place, for up to 1 month.