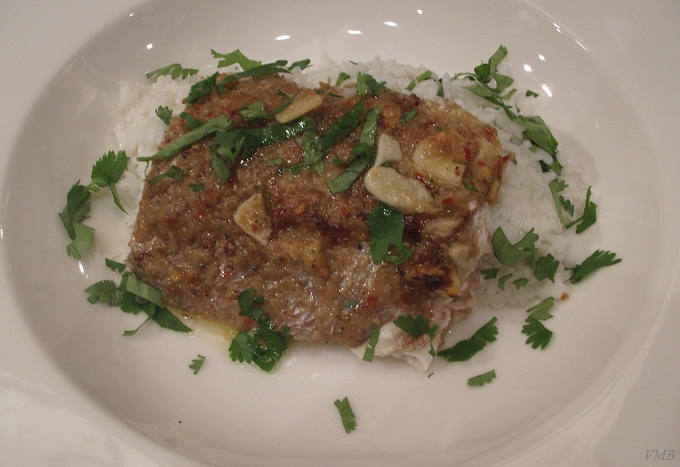 As promised, from Eric Ripert’s “Avec Eric” (Wiley, 2010), companion volume to the PBS show of the same title, the fish dish I prepared using the tai snapper Chef Ripert personally chose for me from the Whole Foods Huntington Beach fish case. (Still to come, a bonus, decidedly non-fish, recipe from the book.)

This dish, without changing a thing, could quite easily be on the table on an after-work weeknight inside of a single hour, if your fish person has scaled and cleaned, as the nice young man at Whole Foods did for me. It needed only to be rinsed when I got home, in case of loose scales. (Get your oven preheating asap, too.) I detoured only a bit, bunging the rice into the old Zojirushi after rinsing instead of cooking it stovetop—saved me having to supervise, and kept it warm until such time as the mixing in of the coconut milk and cilantro. I have always made coconut rice using coconut milk for part of the cooking liquid, so this adding-afterward business was new to me. But, excellent results! Additionally, my 19-year-old son did all the other prep and cooked the fish, so if you have one of those I heartily advocate pressing him into service.

Couple of notes on ingredients: The tai snapper was a very white, mild-tasting fish, nicely firm in texture. The striped sea bass which is pretty easy to come by in whole form from various sources would also work for this dish. Would not be near the four-pound weight specified here, but a two-pound fish would feed two people. If you’re lucky enough to happen upon a whole fish of another variety ask the fishmonger about its suitability for roasting. I can foresee substituting whole small sockeye during wild salmon season.

I used a single, regular-sized, 15-ounce can of coconut milk for both the fish and the rice It was a tablespoon or two short, but I can’t see opening a whole second can for only this much.

Also, I think a minced or sliced fresh red chili would be great replacing the chili flakes called for, but I am glad that Ripert used a totally accessible staple in his recipe. I don’t stock canola, so I used my regular grapeseed oil instead.

Anyway, we loved this fish—and not just because it’d been hand-picked by the chef whose recipe it was. My husband thought its quite stark simplicity was uncommonly elegant. The fragrance, during cooking and while on the table, was extraordinary. I added only a little Romaine salad from pre-rinsed and dried leaves (I try to always have what we call Insta-Salad in the fridge.)

A person can’t have too much easy elegance. I hope you give this recipe a try—and if you do, let me know what you thought.

I really love cooking whole fish, and you can impart lots of great flavor by stuffing the cavity with herbs and lemons. This dish incorporates flavors inspired by the food of Southeast Asia.—Eric Ripert

Preheat the oven to 400 degrees. Generously season inside belly and both sides of fish with salt and pepper. Place fish in a roasting pan.

Combine canola oil with coconut milk, lime zest and juice, ginger, coriander, garlic and chili flakes in a bowl and stir to blend. Spoon the spice mixture over snapper and bake, basting frequently, for 25 to 30 minutes, or until a metal skewer can easily be inserted into the fish and, when left in for 5 seconds, feels warm.

Meanwhile, prepare rice. Place rice in a fine-mesh sieve and rinse under cool water until water begins to run clear. Transfer rice to a medium pot and add 1-1/2 cups of water, lemongrass and a pinch of salt. Bring to a boil over medium-high heat, then lower the heat and simmer for 10 minutes. Remove rice from the heat, cover and let sit for another 10 minutes. When rice is cooked, remove and discard lemongrass. Gently stir in coconut milk and cilantro and season to taste with lime juice, salt and white pepper.

Spoon coconut rice into the middle of 4 plates. Fillet the snapper, running a knife lengthwise down the fish at about the center to separate the side into 2 fillets, and then under the flesh to separate the fillets from the bones. Carefully lift off each fillet and place it on top of the rice. When the top fillets have been removed, lift off the fish bones and portion the bottom fillets in the same manner. Plate the remaining fillets and spoon some of the sauce from the roasting pan over each portion. Finish each dish with a squeeze of fresh lime juice and garnish with the chiffonade of basil and cilantro.