Home Uncategorized At a Crossroads with chef Aarón Sanchez 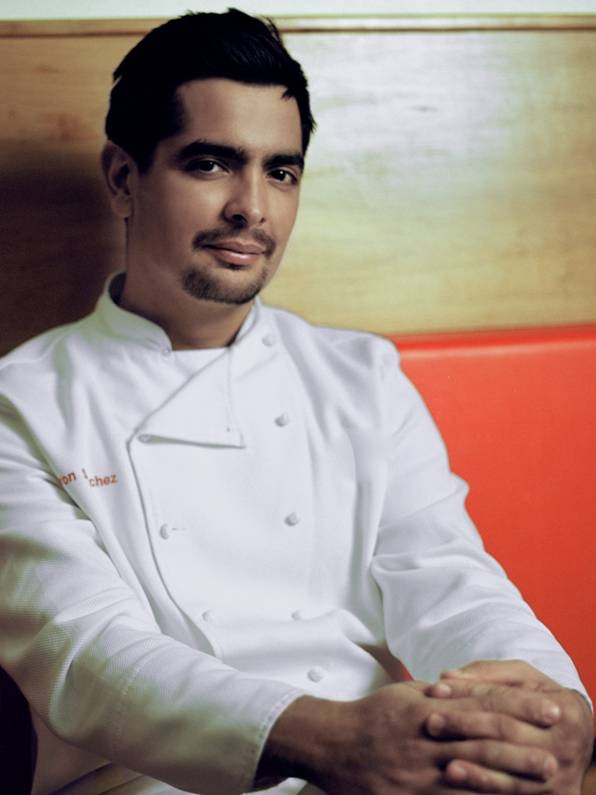 While the House of Blues in Anaheim’s Downtown Disney is a very comfortable place to see live music, the food in the on-site restaurant… well, it might not have reflected the star quality of the acts onstage.

To the rescue—celebrity chef Aarón Sanchez. Sanchez has recently begun the roll-out of a completely revamped menu for all 13 locations now called Crossroads at the House of Blues. Las Vegas, Los Angeles, and San Diego Crossroads have offered the new menu for a little more than a month, and Sanchez was in Orange County this week to supervise its August 29 implementation at the Anaheim location.

Sanchez, who appears on Food Network’s popular “Chopped” (among many other duties on the network), has put together a lineup of Pan-American classics with a twist. “House of Blues has always been about everything together—food, music, spirituality,” he said. “But now the food will be up to the level of the rest.”

The chef put solid, flat-top griddles in the kitchens of all the restaurants, mostly for one thing: Burgers. “You gotta have a great burger. And cooking it on a griddle is the only way to keep the fat in there, so the burger stays juicy.” The beef used is certified Angus, and patties are hand-formed in the restaurant. (There’s also a Jamaican-spiced turkey burger option.)

This reflects Sanchez’ commitment to what he considers most important: How the food tastes.“Sometimes on ‘Chopped,’” he said, “someone will tell a nice story—oh, on a Greek island I had this octopus salad and it was like this.’ I’m sorry, I’d like to eat your story, but I can’t. It has to be on the plate.”

“Working with Aarón was a very enjoyable experience,” says Anaheim Crossroads executive chef Dermot Driscoll. “He’s a creative genius—being able to collaborate on numerous dishes to bring sexy and bold flavors to the menu was great. The Yummy Chicken (a marinated half-chicken grilled with a chipotle glaze) and Shrimp & Grits have been well received by guests, and so have the meatball and pork sliders, and street tacos.”

In addition to his TV work, Sanchez has two restaurants in New York, a host of consulting gigs, plus a baby son, Yuma, with wife, musician Ife Mora. Later this year will see publication of his new book, “Simple Food, Big Flavors: Unforgettable Mexican-Inspired Recipes from My Kitchen to Yours” (Atria, 2011, $26.99), and the opening of a new restaurant, Mestizo, near Kansas City, Missouri. Sanchez’ mother is noted restaurateur and cookbook author Zarela Martinez, and Mestizo will serve the Mexican cuisine he’s been cooking from his earliest days, filtered through years of chef experience.