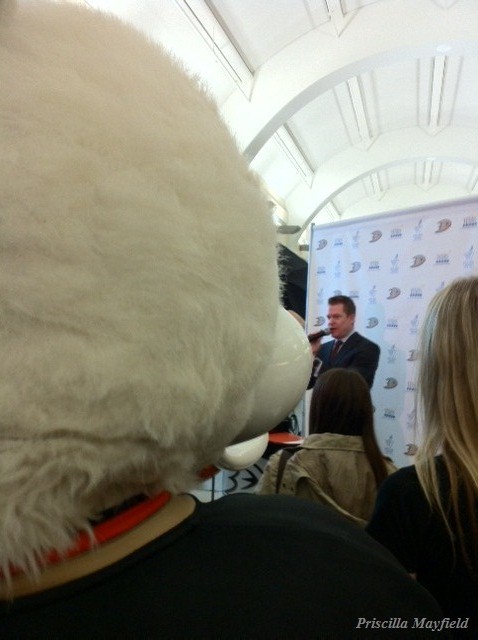 Orange County loves its ducks. For me, it’s actual ducks, the mallard pair that take up temporary residence in my creek when there’s enough water for them. The other day, though, I got an introduction to the other Ducks—or at least the new airport restaurant with the franchise brand: the Anaheim Ducks Breakaway Bar & Grill. You’ll find it between gates 18 and 19 in the new Terminal C. (You did see the comprehensive John Wayne upgrade cover story in our November issue, didn’t you?)

There was quite a crowd at the opening ceremony the other day. I found myself standing cozily next to a large, fuzzy, anthropomorphized duck—Wild Wing, the Ducks’ mischievous mascot. As we waited for the presentation to begin and I mentioned to Suz Broughton, major Ducks fan and mom-blog wrangler for OC Family, that I don’t know nothin’ about hockey, she was nice enough to point out the hockey stars present, one of whom happened to be her very favorite player, Corey Perry. The other was former Duck Scott Niedermayer, of whom Suz said, “See that guy who looks like a math teacher? He’s the greatest defensive hockey player of all time.”

Later, Orange Coast Senior Editor Anne Valdespino, another major Ducks fan, further schooled me about Perry and Niedermayer being part of the Canadian Olympic team that won a gold medal in the last winter games. Wild Wing was a little taken aback overhearing my conversation with Suz, and gave me a sympathetic hug and a big, cartoony MWAH, before getting down on one knee in beseechment. “You’re asking me to love hockey?” He bobbed his giant bill. Well, I told him, it might be working. CUTE!

The Breakaway Bar & Grill, while developed by undeniably corporate HMS Host, has some interesting touches, food- and drink-wise. With its handmade cocktails, including a list of alcohol-free mocktails, combined with the fabulous view of the airport tarmac, it’s not too difficult to imagine actually enjoying a layover. I was pleasantly startled to see a couple of favorites name-checked on the food menu: The haute dog on a pretzel bun ($6) is supplied by Orange’s beloved, peerless Mattern Sausage, and the chicken breast in the grilled chicken sandwich ($12) is from Shelton’s Poultry in Pomona, our local free-range-long-before-it-was-trendy poultry farm. Susan Goyette, HMS Host senior director for communications, told me that before the company opens a restaurant, an advance team scouts what’s good and local. Making the effort to find such suppliers is commendable—I’d like to see more of the like from locally-owned places.

Checking in on the other O.C.-based food options at the new food court (also covered in the aforementioned November Orange Coast)—Jerry’s Wood-Fired Dogs, open; Javi’s, a junior Javier’s, open; and a Zov’s outpost. As I passed, I heard laughter and a familiar voice, and turned to see Zov herself, having a business meeting. I took her presence to mean the “open soon” sign on the glass meant sooner rather than later (true; as of Saturday). Altogether, it’s within the realm to imagine looking forward to eating at the airport.