Home Uncategorized All Fire, All the Time, at Arc in Costa Mesa’s The OC... 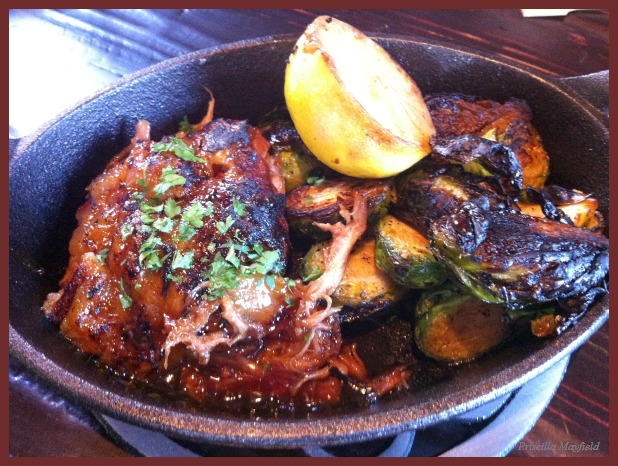 Open less than two weeks, and already busy at lunch when I was there, chef Noah Blom’s Arc, in The OC Mix, is a beguiling mix of guts and glam. It’s not surprising to find unremitting rusticity where the chef breaks down whole pigs and poultry, all the cooking’s done over a wood fire or in a wood-fired oven, and the napkins are Ikea cotton dishtowels. The happy surprise: finesse, even classicism. Charred Brussels sprouts appear, yes, but also tarte flambée, with béchamel and nuggets of house-cured and -smoked bacon, thanks to Blom’s haute cuisine background. After culinary school in San Francisco, he worked for Daniel Boulud at Daniel in New York—and, the Newport Beach native’s first restaurant job as a teenager was at the Ritz. Arc is Blom’s second restaurant in The Mix—he’s also chef-partner at Shuck oyster bar.

The glamour continues in the craft cocktails created by head barman Koire Rogers, known to many for his work at Five Crowns and its SideDoor gastropub, where he’ll continue to have a presence. I got a peek into the special ice room that Rogers had told me about—he’s the subject of “Behind the Counter” in next month’s Orange Coast—where the restaurant freezes its own, ultra-clear ice, cut by hand, customized for each drink. Arc’s long, comfortable bar provides the best view of the wood-fired cooking in the almost stark kitchen, so open there’s “nowhere to hide,” as Blom says.

At lunch with friends, we couldn’t resist ordering almost everything on Arc’s simply worded menu, which is sort of a list of main ingredients with little elaboration beyond a hint of the dish’s flavor profile. For instance: duck, lemon, jam, honey ($15). Turned out to be the best duck EVER. What I learned chatting with Blom is after he breaks down whole Mary’s ducks, the quarters are cured in whiskey, then salt and sugar, before semi-confiting—par-cooking in their own fat. The duck is finished in the wood-fired oven to a tender, luscious turn, nestled into the cast-iron oval with those aforementioned Brussels sprouts. Some dishes, of course, don’t need much exposition, like the charry, crumbly, utterly fabulous hamburger ($18) from the not-so-secret menu written on the exposed side of the walk-in fridge. Blom not fond of specials, with servers rattling off litanies of dishes to diners—an idea I’d like to give infinite +1s. Another dish from the fridge list is a tribute to Blom’s mother: salmon, asparagus, chardonnay ($32). It’s his response to the overcooked salmon and over-the-top California chardonnay pairing that was almost a set meal in a certain type of 1990s dining. His version, with wild salmon, fat asparagus with a drizzle of buttery sauce, and a glass of Davis-Bynum chardonnay, is a model worth revisiting—everybody at the table was swooning over the perfectly cooked salmon and its component parts.