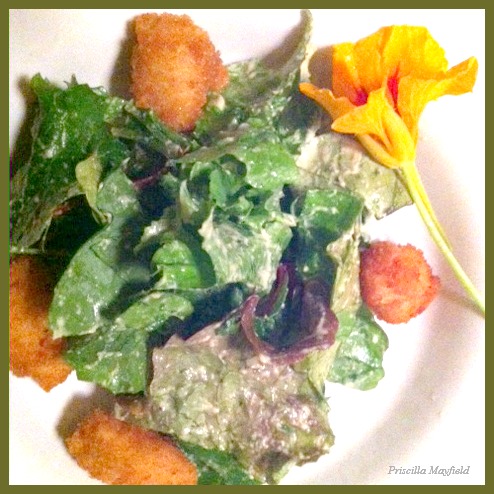 It’s the very best kind of brand layering when two local success stories get together. Recently, Alegria Fresh teamed up with Bluewater Grill at the restaurant’s Tustin location to present their first “Healing Foods” dinner, with dishes composed of Alegria’s fresh-picked produce and Bluewater’s sustainable seafood.

I visited Alegria’s Laguna Canyon “farmacy” in September, and included their leafy-green vegetable bouquets in Orange Coast’s February issue. Bluewater was featured on my Nibbles & Bits food page in October, with a little about its sportfishing yacht that supplies fresh swordfish to the restaurant, and a recipe from executive chef Brian Hirsty. Read dining critic Gretchen Kurz’s Bluewater review, too, from our December issue. I was a media guest at the event.

There’s definite synergy between the two businesses’ strong environmental underpinnings. Hirsty was on hand to assist Alegria’s Jessica McLeish and Yolande Smith, who prepared a largely raw, vegetable-based menu, accented with excellent seafood from the Bluewater supply chain. With a starter of low-temp dehydrated-kale crackers topped with a piped rosette of almond “cheese” in cheddar or chipotle flavors, we sipped a cocktail made with an organic acai liqueur and Bluewater owner Jim Ulcickas’ special kombucha.

At the table, small pots of what looked like butter awaited. It was a combination of trendy (and healthful) coconut oil, and extra-virgin olive oil, seasoned with nutritional yeast, turmeric and sea salt. The savory, rich spread is vegan—no one would mistake it for something that came from a cow—and def for coconut fans only, but I’m OK with all that. I can totally see it in a compound-butter-like mixture, a melting pat on a nice piece of fish. (McLeish was nice enough to share her recipe, inspired by one from Susan Williams, a cook specializing in the sort of healing foods showcased at the dinner.) The dishes served showed off Alegria’s super-fresh (picked just a couple of hours’ earlier), intensely flavorful vegetables, with seafood including mussels from Carlsbad Aquafarm and tender, sweet bay scallops from Baja California. The dessert—raw, vegan, apple “cheesecake,” was light and delicious, with an airy creaminess from I know not what. Magic! Wines from Tolosa Winery in San Luis Obispo’s Edna Valley accompanied each course. Tolosa has been certified by the Sustainability in Practice program, and is 100 percent solar-powered.

More dinners are planned—you can keep apprised by subscribing to email updates from Alegria and Bluewater.

Sea salt to taste, up to 1 teaspoon

Lecithin, an emulsifier, and nutritional yeast, which lends savory umami, are available at natural-foods stores.

Combine all ingredients in blender. Mix until smooth and emulsified. Chill for 2 to 4 hours, then whisk or stir well. Store at room temperature, or chilled.