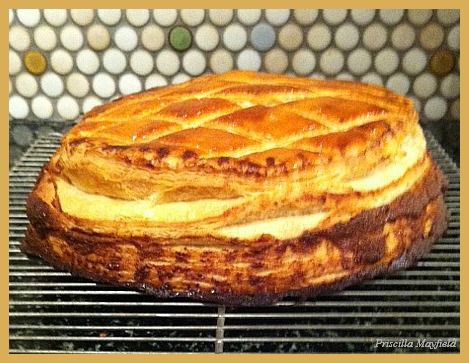 I baked a baby in a cake on Sunday. Moreover, I’m sure I was far from alone in this regard, what with Twelfth Night/Epiphany baby-hiding baked goods like Latin rosca de reyes and Louisiana king cake. Those two are made from brioche-like yeast-raised dough, often with dried-fruit inclusions to accompany the buried baby. I made the French version, galette des rois, using rough puff pastry—the only type of puff to make at home, in my opinion—with an almond paste-kirsch filling. And, that essential baby. (Here’s a similar recipe from the always-reliable Dorie Greenspan.)

The baby I baked was an Acadia Baby, with a lineage that runs straight from Louisiana to Orange County. Artist Lori Galasso (who happens to be my neighbor) is half Cajun—her mother was from the little town of Chauvin, near Houma, Louisiana—and had been chewing on, so to speak, the idea that the usual king cake trinket was way overdue for a makeover. Even at the best bakeries in Louisiana, an inexpensive plastic baby suffices, and home-baked king cakes often use a bean. Fèves, fine-china trinkets in various shapes, are de rigueur in France… why shouldn’t American cakes have an upgraded option?

Galasso designed a plump, white-porcelain putto, which, when not hiding inside a sweet treat, can be threaded with a golden cord to wear as a pendant—perhaps if you really laissez les bon temps rouler during pre-Mardi Gras festivities. (In Louisiana, and elsewhere on the Gulf Coast, king cake is served from before Epiphany on Jan. 6, right up through Fat Tuesday—Feb. 12 this year.) While it seems a bit taking-coals-to-Newcastle, Galasso recently introduced her trinket to some of the biggest Krewe and Mardi Gras suppliers in the New Orleans area. So that Louisiana-to-O.C. line might just become a two-way street sometime soon.

Acadia Baby trinkets ($20 each) are oven-safe and lead-free, and available on Etsy—click here for details.