Home Uncategorized At Masterlink, the Daily Grind is Anything But 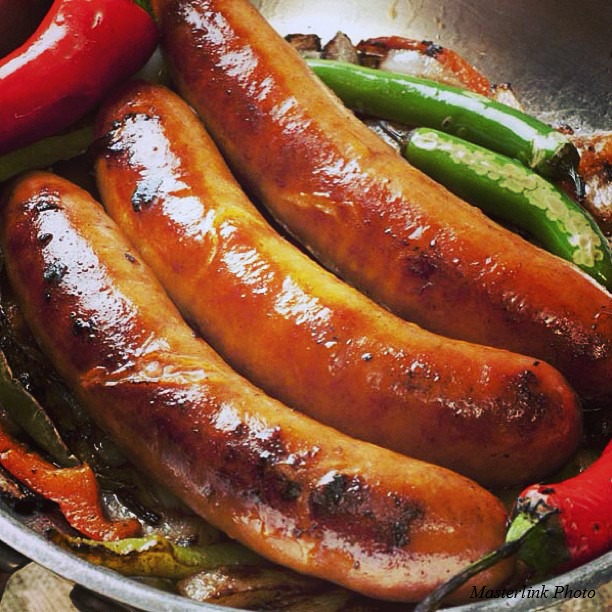 Tucked away behind a no-frills metal security door on the alley side of Big’s Bar and Grill in Fullerton, Masterlink Sausage and Meats quietly hums with activity. The 50-year-old Fullerton institution turns out more than 60,000 pounds of sausages a week, many under its own label, and a lot for brands you know, including one of the very biggest names in the sausage biz. I’m not at liberty to divulge that one, or other clients nearly as big, some of whom send their own proprietary spice blends to Masterlink marked in code—even the sausage makers don’t know what’s in them. For plenty of others, Masterlink does the seasoning and smoking. Sales manager Mike Pease showed me a bin of hickory wood shavings for the smoker—the company doesn’t use liquid smoke flavoring.

I can tell you Polly’s Pies has a custom Masterlink kielbasa, and Early Bird in Fullerton (and soon in Yorba Linda) orders chorizo made to its specifications. Food-truck faves Dogzilla and Tornado Potato serve Masterlink sausages, as does Craftsman Wood Fired Pizza in Placentia. They can also be found right next door at Big’s. The company’s network of co-packers and distributors, some with their own private-label lines, means it’s possible that the sausage in any number of restaurants is made by Masterlink.

Traditional Nurnberger Bratwurst is a longtime staple for the company, and their facilities are also Halal certified. A new all-natural chicken sausage line has flavors like rosemary and Cajun. Pease gave me a peek at a sausage in the experimental stage that has quinoa as an ingredient.

So, it seems they’ve got the global sausage spectrum pretty well covered. And not just for restaurants. You can buy Masterlink sausages for at-home grilling, too. A varying selection is available at Irvine Ranch Market in Newport Beach, The Butchery (formerly Meat House) in Brea, and at the Fullerton factory.