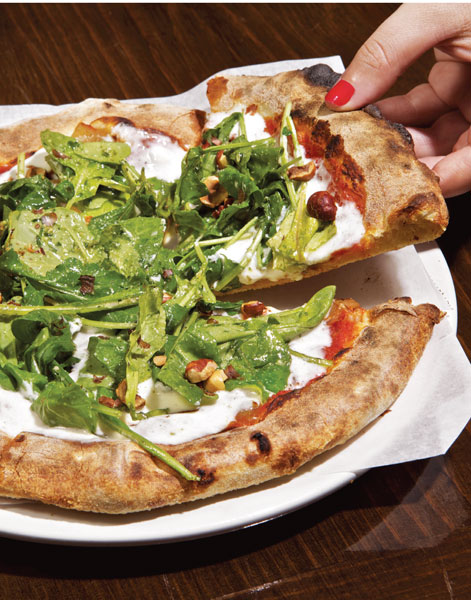 Someone with an itchy finger keeps pulling the pizza trigger. And they have a passion for fast-kindled, thin-crust pies. New ovens are firing up faster than you can say Margherita. Six O.C. pie shops have opened in as many months, with more on the way. So we’re doubling up this month with a dual report on Costa Mesa hot spot Pitfire Artisan Pizza, and South Laguna indie Neapolitan
Pizzeria. Other than their fledgling status and enticing pies, these two, which opened in early winter, bear little resemblance to each other.

At Pitfire, the Talking Heads chant about burning down the house on overhead speakers as the line shuffles up to the cheerful guy manning the register. He is unruffled that I’m practically shouting in his face to place my order, which he loudly reads back with comforting accuracy. The line behind soon stretches out the door, a motley mix of whiny toddlers, relaxed locals, and wary newcomers.

A smiling staffer directs us to a roomy booth, and salads arrive within minutes. Another server drops off pint glasses of pear-apple sangria, a seasonal special, and predicts our pizza will arrive shortly. Instantly is more like it, as moments later we make room for two blistering thin-crust pies, one starring burrata and wild arugula, the other a cool-weather special with singed Brussels sprouts leaves and dry-cured bacon.

Only the footprint remains of this vastly retooled Marie Callender’s. A proletariat-chic landscape of plywood booths surrounds the glowing maw of the hybrid wood-fired oven stoked with almond logs. Nearly every seat is taken the moment it’s vacated. It’s an operator’s dream, especially considering it’s a 120-seat venue now that a bar in back just opened.

The pizzeria is one of seven in the thriving L.A.-based Pitfire chain and the first in O.C. Upbeat and come-as-you-are casual, it’s a pure Cal-Ital original. Dishes may be Italianate, but the makings are all local. Even the site-made pizza dough veers from the Neapolitan imperative, its delayed fermentation yielding a fluffier, yeasty crust with chewy, breadlike nuances. Toppings don’t converge in the center, but are carefully arranged. That most pizzas here run about $10 is remarkable for goods of this quality.

Salads pop with freshness. Both the Nicoise and the chopped salad with roasted corn and garbanzos are better than most. But pay special attention to the seasonal salads. Colorful rounds of ripe heirloom tomatoes in summer, roasted pears with ricotta and pine nuts drizzled with fig-olive vinaigrette in fall—they add so much character to any meal you build here.

You also might think outside the pizza box and consider the sleeper gems. The crispy pork belly panini with zucchini pickles is super, as is any pasta with fennel sausages from L.A. cult butcher Huntington Meats.

And to those diners who grouse about waiting in line to order and pay, think of it this way: There’s no check to await—you can bolt anytime you have a mind to. That’s friction-free efficiency locals are learning to love, if the rapid turnover is any indication.

Though not exactly mellow, the vibe down the coast at Neapolitan Pizzeria is less frenetic, and a bit more grownup. Emphatically Italian, right down to the San Felice flour and the glossy red Stefano Ferrara wood-burning oven from Italy, this snug Coast Highway lair is all about pizza worship. Nine pies dominate the compact menu, fleshed out with a few salads, small plates, and desserts.

As expected, the pizzas are bubbling hot in the middle, with a puffed, spotted corona of just-baked crust all around. Don’t try to eat them as hand-held slices or the toppings will slide off the floppy center. Attacking your pie with a knife and fork is not only acceptable, it’s the preferred method for savoring the alchemy of the Margherita in a perfect bite that contains some tender crust, loose, fresh tomato sauce, milky mozzarella, and fragrant basil leaf. It’s a fine effort, but the funghi pie, with musky hen-of-the-woods mushrooms, nutty fontina, soft rounds of potato, and still sizzling egg, is an umami triumph. The Calabrese is another winner, thanks to the spark of fresh garlic and top-notch Olli salumi from Mechanicsville, Va.

After my first visit, the memory of the fabulous kale, fennel, and pecorino salad, so fluffy and packed with flavors, obsessed me for days. Owner David Manero reports it’s a top-seller. On my second visit, this now Yelpified dish is superchewy and so off-balance that I can’t vouch for it. Perhaps it’s a hiccup resulting from inaugural chef Frank DeLoach’s rapid decampment to Early Bird, where he’s chef de cuisine for the Fullerton restaurant’s new dinner service.

Local veteran Greg Moro helms the kitchen now, and though I could only squeeze in one test drive with him before deadline, I fell for the “small” plate of two veal meatballs the size of grapefruits, bubbling from the oven, aromatic with marjoram, and showered with salty Grana Padano cheese. The terrific house chopped salad with diced greens, salumi, and provolone tossed in lemon-oregano dressing makes up for the disappointing kale.

For dessert, go directly for the dynamite affogato or notable cheese plate. Or, wrap up with a proper Scroppino—a limoncello-prosecco cocktail said to soothe a full stomach when willpower fails.

Photograph by Priscilla Iezzi / For more photos from the shoot, check out the Main Course: Pitfire and Neapolitan Extras Gallery here.