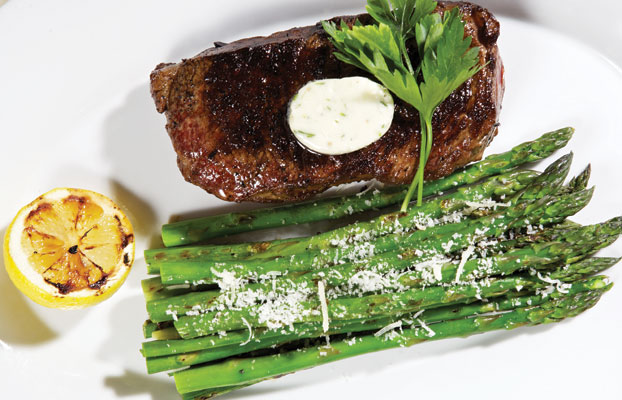 In the ongoing upgrade of restaurants at the Spectrum in Irvine, Paul Martin’s American Grill is yet another player. Open since November, it’s a handsome, strapping venue with 260-plus seats, zero pretension, and a mission to make the journey from
farm to fork as short as possible. A single-page carte of mainly American dishes instantly appeals. It’s familiar, straightforward, and devoid of overly clever menuspeak. Descriptions are short, plain, and complete. “Salt & Pepper Wild Prawns, buttermilk battered with pesto aioli, $17” gets the job done. When questions arise, the friendly servers typically are menu-savvy and ready with cogent answers.

No mystery about those salt-and-pepper prawns, though. They’re fat, luscious, and come piping hot in their light coats of crispy seasoning. Pesto-powered aioli makes for rich dunking, and a little goes a long way. It’s a fabulous starter. Spinach dip, simple as it sounds, is unexpectedly sophisticated. Rather than a bowl of chopped spinach spackle, what arrives is a warm gratin of fresh Bloomsdale spinach leaves, wilting in a loose sauce spiked with sun-dried tomatoes and piquant white cheddar cheese. A nifty share plate, we spoon it over just-toasted sourdough thins. Smoked salmon spread can’t rival the other two appetizers, and the green apple slices that accompany are too thin and few to merit mention on the menu.

The highly seasonal menu is a moving target and change-ups are continual because founding partner and culinary director Brian Bennett tirelessly hunts down small farms and purveyors of premium crops and goods. Sure to be replaced by lighter summer recipes such as roasted tomato or fresh corn and quinoa, soups here are deeply flavored and nicely garnished. Two to keep on your radar for cooler weather: the creamy wild mushroom potage laced with sherry, and the hearty-and-healthy roasted butternut squash soup adorned with sage pesto.

This seasonal quest has a huge impact on such uncomplicated fare—dishes that rely on fresh, clear, peak flavors and eschew heavy-handed intervention. Chimichurri chicken is a fine example of diligent sourcing. Simple grilling preserves the distinct texture and divine flavor of Pitman Family Farms’ free-range, hormone-free birds from Sanger, Calif. Topped with a verdant slurry of bright herbs so fresh the aroma has faintly floral notes along with earthy hints of olive oil and garlic, the poultry reveals opulent flavors we rarely detect in chicken these days.

For another palate wake-up call, try the house burger. House-butchered Angus chuck is ground once, enhanced only by salt and pepper, then hand-formed into a 7-ounce patty bursting with savoriness that almost doesn’t need add-ons, although the bacon, Tillamook cheddar, Point Reyes blue cheese, and sautéed mushrooms are hard to resist.

Dazzling ingredients don’t always add up to excellence, though. One happy hour, bites of greasy fried chicken lack seasoning. Another night’s side of shaved Brussels sprouts is undercooked and light on flavor that a more vigorous sauté would reveal. The Asian chopped-chicken salad is generous, but dull.

Still, the wine list and cocktail lineup deliver punch and excitement. House infusions marry fresh fruit with pristine spirits that get hand-shaken into lively cocktails such as Bistro Champagne Lemonade, a frisky summer elixir of Meyer lemon vodka, lemon juice, fresh basil, and a float of Gloria Ferrer bubbly. Gems from the insightful wine collection range from the exclusive Parr, Sanford and Benedict Vineyard Chardonnay, to the innovative Paul Dolan Mendocino County Pinot Noir “on tap.” Of the 100-bottle list, 71 are served by the glass in hefty 7-ounce pours.

Wine choices by the glass and bottle are just the ticket when dinner ranges from fresh oysters to squash soup to braised short ribs to a gutsy Prime  New York steak. Oysters in their craggy half shells go down nicely with a crisp white. An oaky chardonnay suits a classic warm bacon-spinach salad strewn with toasted California pistachios. For meaty braised short ribs on buttery mashed potatoes (a comfort-food winner that won’t return until the weather cools), a glass of merlot. Terrific Prime all-natural New York steak, grilled to a precise medium-rare and crowned with tangy blue cheese butter, clamors for a well-built cabernet.

The list of from-scratch desserts is short and simple. Seasonal crème brûlée—raspberry on my visits—is vanilla-rich with a lovely texture. Fresh ice creams churned in-house are a no-brainer option for sweltering nights. Of course, dense chocolate is always available, along with seasonal specials. Don’t miss the banana cream pie with a delicate shell that’s brushed with a fine layer of dark chocolate that keeps the crust dry against the freshly made filling and roof of just-whipped cream. It’s superlative. Share if you dare, but you’ll likely regret it.

Paul Martin’s is staking a claim on “no.” No short cuts. No sauced up, tricked-out dishes. No produce from Peru. No attitude. No exotica. It all adds up to a distinctly “yes” destination for enjoying simple, honest, feel-good fare at the peak of flavor.